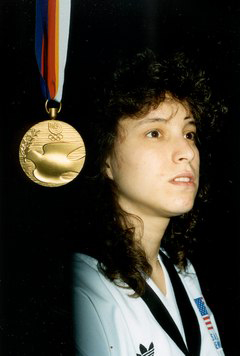 Arlene Limas is one of the greatest Taekwondo athletes of the 20thcentury.  She won the gold medal at the 1988 Olympics in Seoul, and for her career was undefeated in international competition.  In all, Limas has won nine  National and World Championships.  She was named the collegiate athlete of the year in 1987 and the March of Dimes Amateur Athlete of the Year in 1989.  Limas has been inducted into seven Halls of Fame including the Taekwondo Hall of Fame in 2007.

Considered one of the greatest Taekwondo athletes this country has ever produced, Arlene Limas joins the class of 2019 in the National Polish-American Sports Hall of Fame.

Limas grew up in the city of Chicago with four brothers. Her mother, Diane, was of Polish heritage and her father, Arnold, was of Mexican descent. Arlene was a gifted student, making the honor roll at the nationally recognized Whitney Young Magnet High School all four years. She was also class Vice-President, recipient of the Citizenship Award and winner of the Carnation Co. Scholarship for Education Essay. Arlene also played the viola in the All City Orchestra all four years during High School.

Arlene was also a gifted athlete, and was the Most Valuable Player for softball three years in a row, and competed on the varsity level in tennis, basketball, and track & field.

Arlene later attended De Paul University, where she would graduate with a Bachelor Degree in Political Science in spring 1990. But before she graduated, Arlene did something else — she won Olympic gold. The story of how she triumphed at the 1988 Seoul Games is nothing short of remarkable.

Besides her many other activities, Arlene also trained in martial arts beginning at the age of 5. She began competing in karate by 7, and earned a first-degree black belt at 13. Her dream was to compete in the Olympics,  and she heard that martial arts would be added to the 1988 Games in South Korea for the first time as a demonstration sport. However, it was to be Taekwondo, which was the national sport of Korea. Arlene then decided to train to compete in Taekwondo. It was a challenging transition, as karate focuses on the hands while Taekwondo emphasizes kicking. As the Games approached she took a leave from her studies at DePaul to prepare for the competition.

The 5-8, 135-lb. Limas represented the US in the women’s welterweight category. Koreans won all of the other divisions, but Arlene captured gold for the US, defeating Korean Kim Si-Sook in the memorable gold medal match.  In fact, she was the first American to win a gold medal at the 24th Olympic Games.

What made Arlene’s victory even more memorable was what happened afterwards. As she stood on the podium with her gold medal, the public address system announced, “And now the anthem of the United States.” However, the tape machine broke and the music didn’t play. Arlene family in the audience started singing the Star Spangled Banner and Arlene joined in. With tears in her eyes Limas waved her arms to encourage the crowd to join in. The emotional outpouring was one of the highlights of the Games.

While that Olympic gold was certainly a highlight, it was just one of many. Among her numerous titles, Limas won nine National and World Championships. She was also named the collegiate athlete of the year in 1987 and the March of Dimes Amateur Athlete of the Year in 1989.  In addition, Limas has been inducted into seven Halls of Fame including the Taekwondo Hall of Fame in 2007.

Arlene’s success as a competitor was a big contributor to the tremendous growth of martial arts in the US during that time.  However, she also did a lot to promote the sport as a teacher and business owner.

In 1990 she moved to the Washington DC area and worked under Jeff Smith, who owned three successful schools in the Northern Virginia area. Arlene ran Mr. Smith’s largest school with over 350 students. She later opened her own school, Power Kix in Stafford, Virginia. It has since grown into one of the top ranked martial arts schools in the state, teaching all levels of students.

Arlene Limas is not only regarded as a great martial arts competitor, but one of the pioneers of the sport in this country. More than that, she has gone on to use her knowledge, skills and accomplishments to enrich the lives of many, many others.