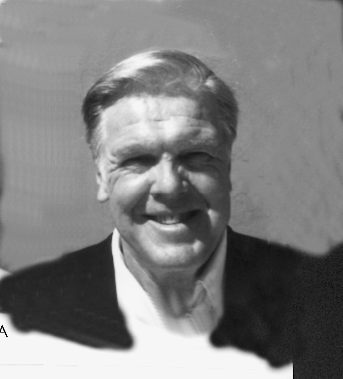 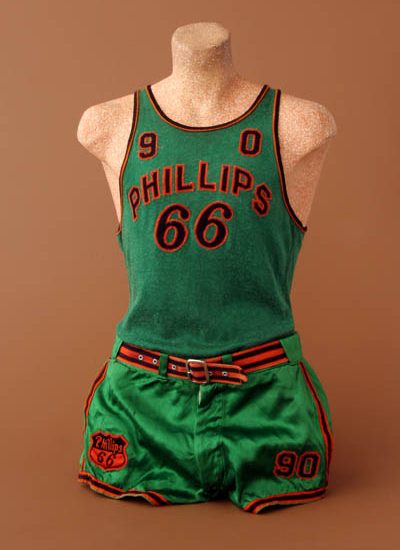 Bob Kurland-basketball’s first great seven-footer-was too tall 50 years too soon. Although he led Jennings High in St. Louis to two state finals, college coaches didn’t want to take the time to develop tall players-except Henry Iba, who offered Kurland a scholarship at Oklahoma A&M (now Oklahoma State). Iba transformed his giant into a scoring threat. Kurland responded by scoring a then-season record 643 points, including 58 in a game against St.Louis University, and leading the Aggies to back-to-back NCAA championships in 1945 and 1946. He was selected All-American three years in a row. Kurland also played on the U. S. gold medal-winning Olympic teams in 1948 and 1952. He rejected an offer to play in the newly-formed NBA and played for six years for Phillips 66ers, leading the team to three Amateur Athletic Union championships. He assumed full-time executive duties with Phillips Petroleum upon retirement.

By:  Buck Jerzy
NPASHF Board Member

Bob Kurland was born 50 years too early. If he was 21 years old today, instead of 71, the seven-foot basketball superstar would be headed to the pros with a multi-million dollar contract.

“Actually, I had a big disadvantage when I got out of Jennings High School in St. Louis – I was too tall,” Kurland explained. “College coaches didn’t want to take the time to develop tall boys like me. The six-footers were faster and more poised.”

Kurland finally got a scholarship to Oklahoma A&M from legendary coach Henry Iba, who labeled him a seven-footer. Other coaches questioned Iba’s wisdom. Phog Allen of Kansas was particularly unkind, calling Kurland a “freak” and a “glandular goon.”

“That made a great impression on me,” Kurland said. “I felt that wound until my senior year, when we waxed Kansas and knocked Phog out of the NCAA Tournament.”

Kurland went on to being named All-American three years in a row, led Oklahoma A&M (now Oklahoma State University) to two consecutive NCAA Championships in 1945 and 1946 and then played on two United States gold medal-winning Olympic teams in 1948 and 1952.

Not bad for a gawky teenager who had coordination problems as a 6-foot-6, 13-year-old and didn’t begin playing basketball until he entered high school.

At Oklahoma A&M, Coach Iba transformed his giant into a scoring threat by helping him develop a left-handed hook shot. In high school he was predominately a defensive and rebounding specialist.

When Kurland joined the Aggies, goaltending was legal. After his sophomore year, college basketball had to change its rules. Clearing the path for the “giants” who followed, Kurland was the first to employ the dunk shot and he also became adept at tip-ins.

Kurland’s scoring average as a junior was 17.1 points per game and he upped it to 19.5 in his senior season. When Oklahoma A&M won its two NCAA titles, Kurland was named tournament Most Valuable Player both years.

As a senior, the redheaded Kurland scored an NCAA record 643 points. This total included a 58-point performance against St. Louis University in his final regular season game. The Aggies went on to defend their NCAA title by beating North Carolina, 43-40, in the championship game.

Kurland was an A student in the classroom and graduated with a degree in Engineering. He rejected lucrative offers as high as $15,000 to play professionally in the new National Basketball League. Newly married, Kurland felt he needed a more stable feature and accepted an executive training program offer by Phillips Petroleum, a growing company in Bartlesville, Oklahoma.

Kurland also continued his basketball career as the company sponsored the Phillips 66ers, a top-notch Amateur Athletic Union (AAU) team. During six seasons with the 66ers, Kurland led the team to three National AAU championships and an amazing 369-26 won-lost record. He was named AAU All-American in all six seasons.

By maintaining his amateur status, Kurland remained eligible to fulfill his dream of becoming an Olympian. The United States team brought home gold medals in 1948 from London, England and in 1952 from Helsinki, Finland.

“The 1952 championship game was a low-scoring affair as we beat Russia 36-25,” Kurland recalled. “Big Clyde Lovelette led the way with nine points and I scored eight.”

After retiring from basketball competition, Kurland assumed full-time executive responsibilities with Phillips Petroleum. He went on to manage special product sales in the company’s marketing division.

Nicknamed “Foothills,” Kurland was inducted into the Naismith Memorial Basketball Hall of Fame, located in Springfield, Massachusetts, in 1961. He also was named Helms Foundation Player of the Year in 1946.

Kurland, always proud of his Polish heritage, isn’t sure if his last name was ever shortened. “My father, Albert, told me that his parents came from a Polish province called Courland. Maybe that’s where we got the name Kurland.”

Bob and his wife, Barbara, are living in retirement on Sanibel Island in Florida. Their four children are spread throughout the United States in Chicago, Denver, Atlanta and Orlando.

Battle of the Giants

Besides Bob Kurland, basketball’s other “Big Man” in the post-World War II era was George Mikan, a 6-foot-10 center for DePaul University of Chicago.

“I really was only a half-inch taller than George,” Kurland confessed years later. “Coach Henry Iba of Oklahoma A&M ‘stretched’ me an inch and a half because he figured the idea of a seven-foot basketball player would capture the imagination of the fans. And it did.”

After Oklahoma A&M won the first of its two NCAA championships in 1945, promoters arranged a benefit game between the Aggies and National Invitational Tournament champion DePaul at Madison Square Garden in New York City.

Kurland remembers: “The benefit was a game with a lot of hullabaloo to the point where everybody didn’t sleep well. It was for what they called the mythical national championship.

“Mikan fouled out in the first half. I had this shot called a ‘scoop sucker shot,’ where I spun and came in low with a scoop shot. We both played a low post in those days. The lane was very narrow and it was difficult to cover a guy so close to the basket.”

Oklahoma A&M defeated Mikan’s DePaul team, 52-44, in that game and the two giants ended up facing each other four more times.

“DePaul beat us three of the five games,” Kurland remembers. “George outscored me a little and I out-rebounded him a little. We still get together occasionally and we have a warm regard for each other.”