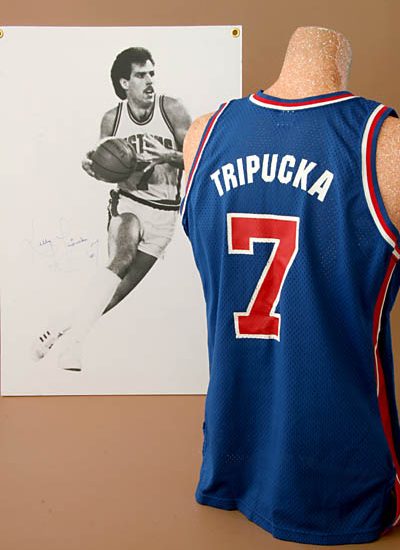 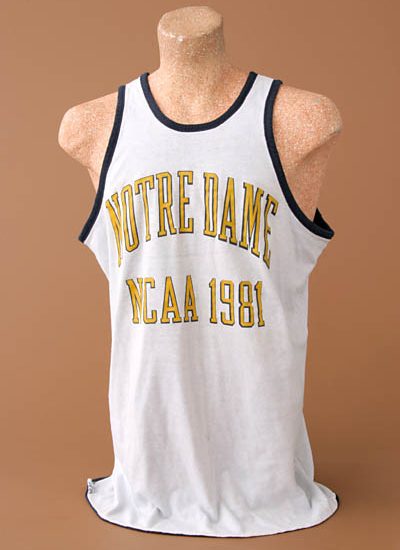 Kelly followed Frank at Notre Dame and they became the first father-son to be inducted into the National Polish-American Sports Hall of Fame. While Frank was a star quarterback at ND and in the pros, basketball was Kelly’s Sport. He was a four-year starter for the Fighting Irish, an All-American as a senior and is fourth highest scorer in the school’s history. Tripucka was a first round selection of the Detroit Pistons in the 1981 NBA draft and played 10 seasons in the pros. The 6-foot-6 forward averaged 21.6 points a game during his five seasons in Detroit and was a clutch scorer, twice being named to the prestigious All-Star team. Tripucka later played for the Utah Jazz and Charlotte Hornets. Tripucka held the Detroit single-game scoring record of 56 points from 1983 until 2001.

It’s not often that a father and son end up in a Hall of Fame together. It will happen this year when Kelly Tripucka joins his father, Frank, in the National Polish-American Sports Hall of Fame.

Frank Tripucka was a Notre Dame great and a Canadian and American Football League star. He played for the Detroit Lions, Chicago Cardinals, and for seven seasons in Canada before joining the AFL’s Denver Broncos as a coach when the league was founded in 1960. Because the Broncos didn’t have an adequate quarterback, coach Frank Filchock asked Tripucka to come out of retirement to play for the Broncos. He led Denver for four brilliant seasons and set franchise passing records that were not broken until John Elway came along 20 years later. He was inducted into the NPASHF in 1997.

Like his father, Kelly Tripucka starred at Notre Dame, but as a basketball player. He was a four-year starter for Digger Phelps and first team All-American as a senior. Kelly’s teams, the most successful in Notre Dame history, played in the NCAA tournament in each of his four seasons beneath the Golden Dome – including trips to the Final Four, the Elite Eight and the Sweet Sixteen.

Kelly was the clutch scorer for the Fighting Irish during his seasons in South Bend. He left Notre Dame trailing only Austin Carr, Adrian Dantley and Tom Hawkins on the all-time Irish scoring list.

The Detroit Pistons selected Kelly with the 12th pick in the first round of the 1981 National Basketball Association draft. While teaming with Isiah Thomas, Kelly scored 1,772 points and averaged 21.6 points per game in his initial NBA campaign. Tripucka’s rookie scoring total remains a franchise record.

Tripucka’s sophomore season in the pros was sensational. He averaged 26.5 points and set a Pistons single game scoring record when he blistered the Chicago Bulls for 56 points on January 29, 1983 at the Silverdome. While playing for Coach Scotty Robertson and later Chuck Daly, Kelly averaged 21.6 points in his five seasons in Detroit, establishing himself as one of the top scorers in franchise history. As a Piston, he was chosen by the NBA coaches to play in the 1982 and the 1984 All-Star games.

“He was a very good shooter and wanted to score,” recalled Will Robinson, the team’s veteran scout and consultant.

After being traded to the Utah Jazz in 1986 and playing two seasons there, Kelly burst onto the scoring scene again for Coach Dick Harter and the Charlotte Hornets averaging 22.6 points per game for the 1988-89 season.

Tripucka is among a select group of excellent shooters who have graced NBA courts over the years making 47 percent of his field goals and 85 percent of his career free throws.

The 6-foot-6-inch, 225-pounder was an incredible prep player at Bloomfield, New Jersey High School. His prep career was judged the best ever in his state when he was named New Jersey high school player of the century by a panel of experts for the Newark Star Ledger.

Kelly, currently a New Jersey Nets’ broadcaster, is married and a father of three. He is as proud of his Polish heritage as he is of his storied career and is a welcome addition to the National Polish-American Sports Hall of Fame.

Not only is Kelly Tripucka the first son to follow his father into the National Polish-American Sports Hall of Fame, but he also becomes the ninth former Notre Dame athletic great to be inducted.

Maybe the University of Notre Dame should change its nickname from the Fighting Irish to the “Fighting Poles.”

Johnny Lujack was the first ND star to be inducted into the Hall in 1978. He was followed by football tackle Ziggy Czarobski in 1980 and end Leon Hart in 1988. Along with Kelly’s dad, Frank (1997), all were teammates when Notre Dame won back-to-back national football championships in 1946 and 1947. Both Lujack (1947) and Hart (1949) went on to win the coveted Heisman Trophy as the nation’s best college football player.

Two other former Notre Dame football stars, both named Szymanski but unrelated, are in the NPASHF. Linebacker Dick (1951-54) was elected in 1994 and center Frank (1943-44) the following year.

Rounding out the nine Notre Dame Polish Hall of Famers are Vince Boryla (1984) and Carl Yastrzemski (1986). Boryla was an Irish basketball star and later a top notch pro in the National Basketball Association.

“Yaz” played baseball at Notre Dame for one year before beginning a brilliant career with the Boston Red Sox on his way to the Baseball Hall of Fame in Cooperstown.