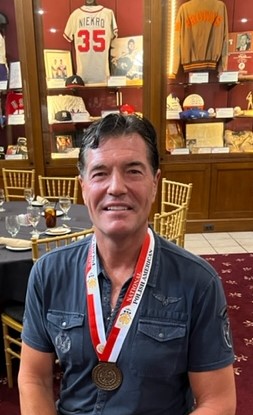 Major league pitcher who played 14 seasons in the majors,13 seasons with the Kansas City Royals (1984-96) and one with the California Angels (1997). The hard throwing right-hander was a member of the 1985 Royals World Series Championship team and became the ace of the staff in 1988. In 1988, Gubicza won 20 games and finished 3rd in voting for the Cy Young Award. He was named to the 1988 and 1989 All-Star teams and also led the American League in games started in 1989 and 1995. In 1996 Gubicza became the all-time Royals leader in strikeouts. Enduring shoulder and arm problems forced Gubicza to retire, posting a career record of 132-136, a 3.96 ERA and 1,367 strikeouts.

Mark Gubicza grew up in Philadelphia with the dream of becoming a major league baseball player. It was a dream that came true for 14 years, and produced 132 wins, a pair of All-Star selections, and a World Series title.

Mark Steven Gubicza was born on August 14, 1962 in Philadelphia. His father, Anthony, played baseball in the White Sox organization until his major league dream was ended by a shoulder injury.

Both of his paternal grandparents came from Hungary, but Mark was constantly asked if he was Polish. “It was funny,” he said. “It was a non-stop thing going on.” In particular, while playing for the Kansas City Royals the team’s Polish American clubhouse manager, Alex Zych, kidded him about it constantly.

Mark finally decided to research his ethnic background through ancestry.com and 23 & Me. “Lo and behold, it comes back that I’m more Polish and German than Hungarian!” he said. “I guess everyone was right all along.”

On his mother’s side, Mark is Italian, English and Irish.

Anthony’s own immigrant father had discouraged his son from playing pro baseball but wanted him to “instead work in a plastics factory in back home in Philly.” However, Mark’s father was very supportive of his big league dream.

In his youth Mark played sports all the time. “I loved being outside, playing sports and having that team camaraderie,” he recalled. He had three older brothers that he competed against, and “that made me better.” Mark became a star athlete at William Penn Charter School in Philly, both in basketball and baseball. His father, Anthony, helped him develop as a pitcher, and he was soon attracting big league scouts with radar guns.

The 6’5” right-hander was also recruited by a number of colleges, and eventually settled on Duke. However, he was looking forward to the 1981 draft, hoping he’d be selected by the Phillies. He ended up being drafted by Kansas City in the second round. Royals General Manager John Schuerholz came to Philadelphia and met with the Gubicza family. Although his mother still wanted him to go to Duke, Mark decided to forgo college and turn pro.

“All I thought about my entire life was being a baseball player,” he recalled. “In the end it was the right decision, and everything worked out for me the way I envisioned.”

Schuerholz had high hopes for the young pitcher. “It was clear he had not only the talent package, but a bulldog mentality which would be a key to his future success.”

In the minors Mark added a slider and sinkerball to his curve and slider, and quickly developed in an outstanding pro pitcher. In 1984 the 21-year-old was called up by the Royals and on April 6, 1984 made his first big league start against Cleveland.  He took a 2-0 loss, but turned on a quality start with five hits allowed, one run, one walk, and four strikeouts in six innings. Gubicza finished his first season going 10–14 and a 4.05 ERA.

In his second season Mark went 14-10 and the Royals won the 1985 World Series. “Winning a World Series by age 23 was incredible,” he recalled.

In 1990 Gubicza began struggling with injuries, especially to his throwing shoulder, and over the next few years experienced “a lot of ups and downs.” He adjusted by becoming more of a control pitcher, and relying heavily on his slider.

In July 1996 Mark was hit by a line drive that broke his tibia, ending his season. That October the Royals traded Gubicza to the Anaheim Angels. He could have vetoed the trade, but agreed to go to Southern California, where he had made a home with his wife, Lisa, and three children.

Mark started two games in the 1997 season before injuries sidelined him again. A free agent in 1998, he signed a minor league deal with the Los Angeles Dodgers, but soon decided to retire at age 36. Soon afterwards Mark got in broadcasting, and now works as a color commentator on TV coverage of the Los Angeles Angels.

Gubicza enjoyed a very successful 14-year major league career, earning a pair of All-Star selections and a career record of 132-136 along with an ERA of 3.96. One of his career highlights was helping the Royals clinch the 1984 American League Western Division and the 1985 World Series crown.

Looking back, Mark recalled a phone call he made to his father soon after he made it to the big leagues.  He said “Dad, this is a dream,” to which his father responded: “Son, never wake up.”  It’s a dream that, according to Mark, “I still haven’t woke up from.”