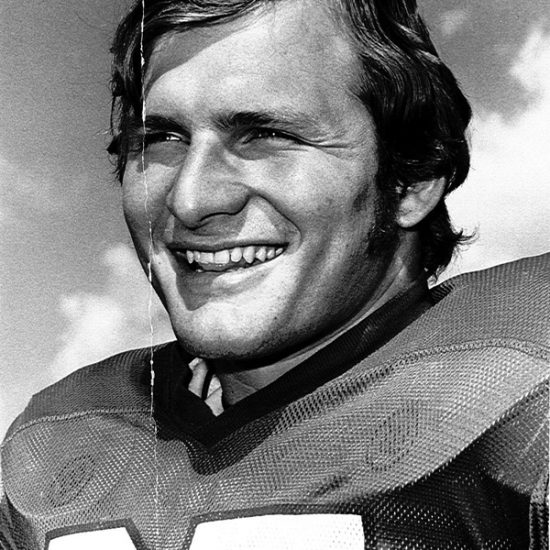 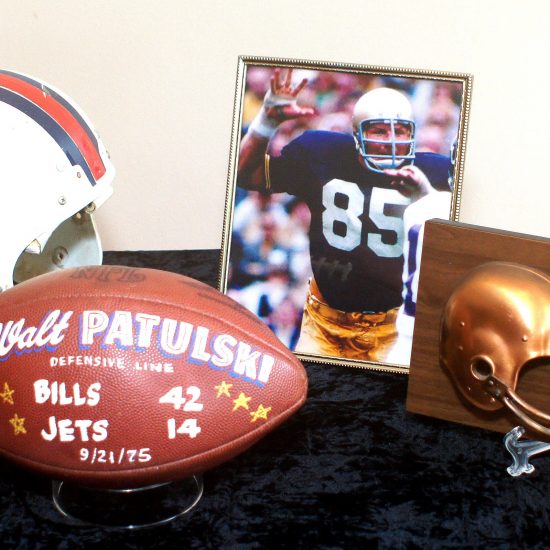 Inducted June 23, 2014
Walt Patulski, a three-year starter at The University of Notre Dame, was generally considered the best collegiate lineman in the country from 1969-71. The 6-foot-6, 260-pound defensive end was a unanimous All-American in 1971, winning both the UPI Lineman of the Year award, and the Lombardi Award, given annually to the nation’s outstanding lineman. He finished ninth in Heisman Trophy voting that same year, and was selected for the College All-Star and Hula Bowl games. The Buffalo Bills made Patulski the first overall pick of the 1972 NFL Draft, an honor not since bestowed upon any Notre Dame player. His NFL career was cut short in 1977 due to a knee injury.

The University of Notre Dame has produced a lot of great football players over the years, including Polish-American Sports Hall of Fame members Ziggy Czarobski, Frank Tripucka and Johnny Lujack. Another of those Fighting Irish greats is Walt Patulski, who is now joining them in the Hall of Fame.
Walt was born on February 3, 1950 in Fulton NY. He developed into a star fullback at Christian Brothers Academy in Syracuse, and also excelled in basketball and track. He was heavily recruited to play football, and nearly went to Syracuse University to follow the footsteps of fullback Larry Csonka. However, he opted to go to the University of Notre Dame, where the Fighting Irish soon decided they wanted to convert him to defensive end. Patulski, seeing it as a way to get in the starting lineup more quickly, went along with the decision. He ended up starting every game in his collegiate career.

Patulski’s size, agility and athleticism made him one of the top defense linemen in college. Over his Notre Dame career Patulski made 186 tackles, 40 for minus 241 yards; broke up 10 passes; recovered five fumbles and returned one blocked punt 12 yards. Notre Dame compiled a record of 25-4-1 over those three seasons while Patulski was a starter.

It was his senior year in 1971 that was really spectacular. He won the very first Lombardi Award, given to the most outstanding lineman. He also was a unanimous All-American, and named the nation’s top lineman by UPI and Gridiron Magazine. He also finished ninth in the Heisman Trophy voting, an unusually high placement for a defensive player.

The Buffalo Bills were the worst team in the NFL in 1971, with a 1-13 record, and received the first overall pick of the 1972 NFL Draft. Even though Buffalo had the number one overall pick in 1969 in the person of O.J. Simpson, the franchise continued to struggle. The team chose to bolster its porous defense by drafting Patulski. Buffalo’s large contingent of Polish American fans was delighted. The Bills gave Walt a five-year contract with a $60,000 bonus and a first-year salary of $25,000.

Walt immediately became a starter and played well. He was a big part of an improving Bills defense that helped the team to a 9-5 record in 1973. In 1974, the Bills again went 9-5 and made the playoffs for the first time in eight years. Patulski stood 6-6 but only weighed about 250 pounds, at most, and was solid if not spectacular at defensive end. Today, pro coaches would have likely made much better use of his superior agility and athleticism. In addition, he and Head Coach Lou Saban had a strained relationship. Saban was hard-nosed and old school, and wanted players who only cared about football. Patulski, an intelligent man with interests off the gridiron, wasn’t one of his favorites. After the 1975 season Saban traded Patulski to St. Louis for a 2nd round pick.

St. Louis had high hopes for Patulski; in their game against the Bills in 1975 Walt had two sacks against the great Cardinals offensive that allowed just eight sacks all season. However, Patulski missed the 1976 season with injuries, and a serious knee injury ended his career following the 1977 season. His playing career was over at the age of 28.

Returning home to the Syracuse area, Walt went on to build a successful career in the securities and insurance industries. Regarded as one of the nicest guys in Syracuse, he has been a recipient of the Key to Syracuse for his distinguished community service. He also served for six years as Commissioner of the Syracuse Board of Education. Walt has been a board member of the Boys and Girls Clubs of America, and has been active in the effort to bring Little League to Poland. Walt Patulski achievements in the NFL were limited, but his collegiate career at Notre Dame was spectacular. Perhaps more importantly, he has utilized his accomplishments in the football arena to become a successful businessman who has devoted himself to helping others improve their lives.