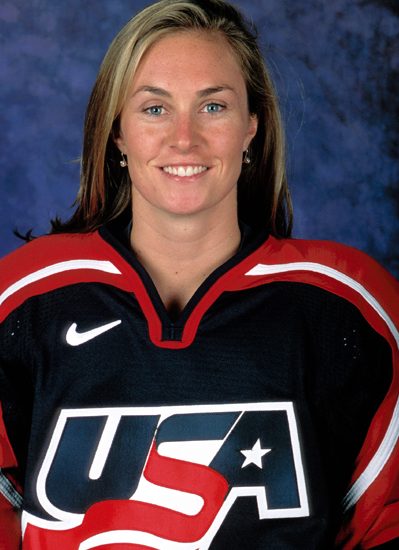 Allison “AJ” Mleczko played college hockey at Harvard, leading the Crimson to the NCAA title in  1999.  In her senior season as captain, she scored 37 goals, 77 assists, and 114 points in only 34 games, the most prolific scoring season in women’s college ice hockey history.  Named to the All-American team, Mleczko won the Patty Kazmaier Award, given to the women’s top college hockey player.  She competed at two Olympics leading her team to the gold medal in 1998 and the silver medal in 2002.

As a five-year-old at her local outdoor rink in New Canaan, Connecticut, Allison “AJ” Mleczko asked her parents if she could trade her figure skates in for a pair of hockey skates. “It looked more fun to me,” she said. “My parents told me I was just enthralled by the game of hockey.”

It was then a storied hockey career began.

After asking to play hockey, Mleczko began skating with the local boys’ team because no other girls played hockey at the time. Parents thought her involvement was endearing until a few years later when the boys were getting bigger. It didn’t faze Mleczko, though.

“Everyone thought it was kind of cute. I was the only girl, but I stuck with it. As I got older the parents were kind of like, ‘this isn’t cute anymore, it’s getting rough and physical,’” she said. “But I stuck with it.”

She also stuck with figure skating because her parents were big believers in you don’t start something and quit it. Mleczko would be on the ice day and night.

“I did both through fourth grade,” Mleczko said. “I used to figure skate before school and after school I’d go to the rink and either have hockey practice or play. There was a pond, too. I was sort of a rink rat.”

Mleczko retired as a figure skater and propelled through peewees into bantams and eventually began playing part-time with an all-girls team called the Connecticut Polar Bears.

“I don’t know if would’ve consciously said this at the time, but I think that’s when I was like, ‘First of all, there are other girls that play and second of all, I’m keeping up with them,’” she said. “I went away to boarding school as a 10th grader and that was the first time I played all exclusively girls, with and against girls. I think at that point hockey was something I was good at and loved. I always knew I loved it, but I think that’s when I realized I was good at it.”

She wasn’t the only one who realized she had a future on the ice. Mleczko was recruited by Harvard and Princeton to play hockey.

“I seriously considered Princeton,” she said. “My sister was at Harvard already and she was two years ahead of me. Harvard felt more at home to me. At the time, Princeton was a much better hockey team, so a lot of people assumed I would go to Princeton, but I chose Harvard.”

She competed in the 1997 IIHF World Women’s Championships helping Team USA to a silver medal, falling to Canada in the championship game.

The next year in the 1998 Olympic Games in Nagano, Japan, the first Olympic Games that included Women’s Hockey as a sport, Mleczko and Team USA had a chance at revenge.

“Within the locker room, we had very high expectations, she said. “We wanted to win a gold medal. There had been four World Championships up to that point and Team USA had gotten silver every time and Team Canada had gotten gold. Expectations from the world was Canada would get gold, US would get silver, Finland would get bronze.”

Team USA and Canada cruised in the tournament, each qualifying for the gold medal game before their scheduled preliminary game. That meaningless game proved to be a huge confidence booster for Team USA.

“We were down 4-1 with 12 minutes left and came back to win 7-4,” Mleczko recalled. “It was such a huge moment for us to realize we could beat them.”

Team USA defeated Canada 3-1 to earn the first ever gold medal in Women’s Hockey at the Olympic Games.

“It was in Japan, pre-social media, and we were in our own little bubbles,” Mleczko said. “I had no idea the influence that that team had. It was a 12- or 13-hour time difference and we played at 6 p.m., so the next morning and they played it on an hour tape delay. All these school kids and people were waking up and going into school late to watch the game. We had no idea.

“I remember IBM had set up an email system for the athletes to contact people. I remember emailing people the day or a couple days after we won, telling people we won and then when we got home they said, ‘We know you did, we watched, you were all over the papers.’ It was a really exciting time and we had no idea.”

Mleczko competed for Team USA until retiring in 2003, earning a silver in the Olympic Games in Salt Lake City in 2002 and two more silver medals in the World Championships in 2000 and 2001.

Today, Mleczko is mother of four, a wife and works as a broadcaster for MSG Network, NBC and NBC Sports. Her Polish heritage is something that she continues to be proud of and is continuously learning more about.

“With a name like Mleczko, you couldn’t avoid it,” she said. “My father-in-law for years when my husband and I were dating, he would call me the “Polish Princess” and I kept telling him I’m not royalty, but I’ll take it.

“My father’s father who was the one whose parents were both from Poland and he died when I was two. I think a lot of the Polish traditions died with him in terms of things that we may have done or eaten, but I will say this induction has been really, really, awesome in that I have reached out to a lot of my Mleczko relatives and I’m finding out more about my heritage. Being Polish has always been a part of who I am and my identity, but I didn’t really know what that meant. I’m finding out more about that.”