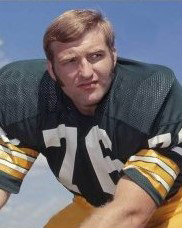 Defensive lineman at Notre Dame where he starred for three years (1967-1969). In 1969, Mike was a unanimous All-American, chosen as UPI lineman of the year and finished sixth in the Heisman voting. The Green Bay Packers made him the second overall selection in the 1970 NFL Draft, and he played eleven years in the NFL with the Packers, Raiders and Giants, before finishing his last half-season in Detroit.  He was named Packers Rookie of the Year and twice led the Packers in sacks.  Recently, McCoy was the 2010 recipient of the Football Writers Association of America “Bronko Nagurski Legends Award”, which recognizes “the best of the best” defensive collegiate football players of the past 40 years.

Mike McCoy has made a rather seamless transition from the often violent world of football to a life of selflessness and compassion; and his love of life has never been stronger.

At age 70, McCoy is as vibrant and energetic now as he was 20 years ago. His faith in Christ and the gospel have provided his life and many of those around him with direction and purpose. His Polish heritage is a source of pride and stability, and the two, where he came from and where he is today, has McCoy on a path of spirituality that has reached those locked in African prisons and thousands of children in school rooms across North America.

This evening we honor Mike McCoy the athlete. Not lost in this celebration is Mike McCoy, the football player turned minister, whose tireless work has provided hope for thousands whose lives were once lost in despair.

McCoy was one of the nation’s top linemen when he played for Coach Ara Parseghian at Notre Dame in the late 1960s. McCoy was named UPI (United Press International) lineman of the year in 1969 and finished seventh in the voting for the Heisman Trophy. Selected as the second player overall in the 1970 NFL draft by the Green Bay Packers, McCoy played 11 seasons at defensive tackle for four NFL teams, beginning with the Packers and ending his career with the Detroit Lions in 1980. Twice he led the Packers in sacks and he was named the team’s rookie of the year in 1970.

He’s been inducted into the Pennsylvania Sports Hall of Fame and also received the Harvey Foster Humanitarian Award from the Notre Dame Alumni Association. Upon graduating from Notre with a degree in Economics, McCoy received the Bronco Nagurski Legends award which recognizes the best defensive football players (NCAA) in the past 40 years.

After retiring from football McCoy was appointed by President Ronald Reagan to the Council on Sports for a Drug Free America. Then Pennsylvania Governor Dick Thornburgh appointed McCoy to the Pennsylvania Council for Physical Fitness.

McCoy now lives in Florida with his wife. McCoy has four children and 11 grandchildren.

The second of three children, McCoy grew up in Erie, Pa., and attended Cathedral Prep, an all-boys Catholic school. His parents, Irene and Thomas McCoy, often had financial difficulties and, because of this, the McCoys moved in with his maternal grandparents. Alice Szparaga, was McCoy’s grandmother; John L. Szparaga, his grandfather. Alice’s father, Joseph Sobolewski, arrived in the U.S. from Poland in 1883 and settled in the Buffalo area.

“We also had my aunt and uncle (Fran and Eddie Szparaga, Eddie being Irene’s brother) living with us and it was a totally Polish (home life),” McCoy said. “I remember going to the Polish market. It was a different time then. Before we moved in (with his grandparents) we had moved twice before. Having that foundation, that family, gave me a sense of belonging. The Easters and Christmas’s, I was very much influenced by (my Polish heritage).”

McCoy’s father and his family immigrated through Canada then to Erie. McCoy said his parents met at a Polish bar and much of his childhood memories are of eating Polish food, whether it was pierogis, one of his favorites, czarnina, city chicken and other dishes prepared by his mother and grandmother.

“How do you think I got so fat?” McCoy said.

Truth be told, McCoy had difficulties as a child. In the third grade he was 5-foot-5 inches and weighed 180 pounds making him an easy target for classmates to tease and to shout verbal abuses.

“I got my revenge when I started playing football,” McCoy said.

That didn’t come until his sophomore year when McCoy set aside the Twinkies and milkshakes, and found a new, more rewarding passion. McCoy credits the headmaster at the school issuing challenges, in the classroom and, at least for McCoy, on the playing field. By his junior season McCoy was a star and had several colleges recruiting him including Penn State. Cathedral Coach Tony Zambrowski helped McCoy during this recruiting process and he took McCoy on a visit to South Bend. That’s all it took. McCoy was sold.

McCoy entered Notre Dame as a 6-5, 270-pound freshman and was a three-year letter winner (freshmen were not allowed to play on the varsity team then). In his final game as a junior in 1968 he led a defense that held USC’s O.J. Simpson to 55 yards rushing on 22 carries. Simpson would go on to win the Heisman Trophy that season. The next season Notre Dame accepted a bid to the Cotton Bowl to play Texas. It was the first time Notre Dame (and second time overall) competed in a bowl since 1924.

Among his best memories in the sport are the rivalry games against USC and Michigan State.

After his NFL career McCoy worked in a number of capacities before finding his calling. The catalyst came when his oldest child, Molly, came home from her seventh grade class one day and told her father some of the things taking place in and out of school. McCoy was stunned and appalled by what his daughter told him. He realized there was a culture change, one that he saw was potentially damaging to today’s youth.

“I had one of those epiphanies,” he said. “I knew I had to get involved. I had a platform having played in the NFL.”

Having earned his degree in Economics, McCoy had worked in the corporate world before finding his true calling – ministry.

McCoy began working within Catholic ministries in 1986. He joined Bill Glass Ministries in 1992. Glass was also a lineman in the NFL (Cleveland Browns). McCoy spent 19 years with Glass before founding his own, the Mike McCoy Ministries (mccoy77.com).

Initially, McCoy travelled the globe spreading the word of the Lord. Recently he has limited his travel to North America concentrating on Catholic schools, mainly due to his background.

The mission of his ministry is to help people, particularly young people, to lead a life of purpose and to be strong-willed when faced with negativity. McCoy speaks about the peer pressure and bullying, and to deal with these outside influences with self-confidence in order to achieve true success.