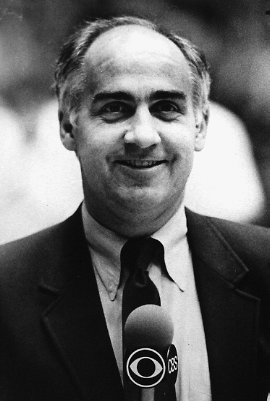 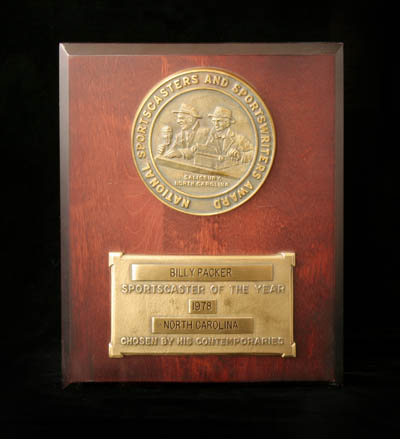 Regarded as one of the most knowledgeable basketball broadcasters in the business, Packer’s love for the game blossomed at Wake Forest University where he led the Deacons to two Atlantic Coast Conference titles and into the Final Four of the 1962 NCAA tournament. He scored a career 1,316 points. His broadcasting career started in 1970 doing high school football games. He made the big time five years later when NBC hired him for the NCAA regional playoffs. He has broadcast basketball for CBS since 1982.

Billy Packer is a man with lots of opinions. His outspokenness has gained for him, and college basketball broadcasts on CBS-TV Sports, a huge and devoted following.

“I want that fan at home sitting there, thinking about other ways to play the game. It’s not that I have the answers, but that I want to impart on fans the alternatives of doing something.”

The first time he was behind a microphone, he gave his listeners something to think about. He described that moment in a 1985 magazine interview:

“When I was assistant coach at Wake Forest, the head coach didn’t like to do things on radio. The first time I was on the air, the station asked me to do post-game comments after we played Duke. We had lost the game in overtime. And we had a chance to win it at the foul line.

“I guess I was kind of violent in my statements. Wake Forest had a real problem with my talking about jock straps, but the radio station loved it.”

Packer – his Polish name is Paczkowski – grew up in a basketball family. His father, Anthony, was the men’s basketball coach at Lehigh University. Billy earned Pennsylvania All-State honors in basketball in his senior year in high school in 1958. At Wake Forest, he earned All-ACC honors (1960-62). He led the Demon Deacons to three ACC titles and into the Final Four of the 1962 NCAA tournament. Wake Forest finished third in the tourney after losing to the eventual national champions, Ohio State. In 1965, he began a five-year stint as an assistant coach at his alma mater.

He finished his basketball career with a total of 1,316 points, fifth leading scorer in school history at the time (he’s eleventh now). Packer “tightened up his jock strap” to sink the winning free throws in a Dixie Classic tournament championship game his sophomore year. He kept Wake Forest alive in the 1962 Eastern Regional with two baskets in the final 18 seconds of regulation against St. Joseph’s.

Packer’s broadcasting career started in the fall of 1970 doing high school football games. He made the big time in 1975 when NBC hired him for the regional playoffs of the NCAA tourney. He stayed with NBC until 1982 and moved to CBS when that network outbid NBC for the rights to broadcast the NCAA championships.

What helped lure Packer to CBS was the network’s agreement to allow him the freedom to help set up the season’s schedule of TV games. His connections to basketball coaches, attendance at clinics and a year-round close contact with the game prompted his former color man-sidekick on NBC, the late Al McGuire, to say: “He’s the only reason CBS is the success they’ve been. His scheduling knowledge is just incredible.”

About his often loud and bitter on-the-air disagreements with McGuire, Packer has said:

“Al and I managed to disagree about every damn thing. Our backgrounds are different. They were legitimate disagreements because there is no black and white in basketball, just gray.”

Packer has been inducted into the North Carolina Sports Hall of Fame, the Wake Forest University Hall of Fame, and has received the Curt Gowdy Award from the National Basketball Hall of Fame. In 1993, he earned the Sports Emmy Award for Outstanding Sport Personality/Analyst.

“When it (broadcasting basketball) isn’t fun anymore, I’ll quit,” Packer has been quoted. “I can’t sit there and lie to people.” His legion of fans hopes Billy Packer keeps on having fun for many years to come.

“I really don’t look upon myself as a professional broadcaster. A professional is a person who can properly prepare himself for any number of things. A person like Dick Enberg who could provide the play-by-play at a ballet. In my case, I just know the game of basketball. I have never tried to develop a style as a broadcaster. I just try to talk to the fan like two guys on barroom stools, trading comments about the game.”

About the scarcity of athletes as role models for kids:

“What I think has changed is media attention to the negative. It makes it look like that’s the norm. In my opinion, the athlete of today, both pro and amateur, is of such higher caliber academically, socially and physically than he was when I was in college that it isn’t even funny. Yet, when I was a kid, the press never wrote about negatives. Today, it’s in vogue. I think it began with Richard Nixon. He’s the first person in such a high position to be exposed from a negative standpoint. Nobody puts anything in the paper about the good things that a Steve Garvey has done in the community, but reams are written about the breakup of his marriage.”

About “Who is Billy Packer, really?”

“I don’t even get that deep. I have no interest in knowing who I am, in what makes me tick. All I want to do is my own thing in the next given moment. I get amazed when I see people sit down and ask those questions, ‘Who am I?’ and ‘Where am I?’ I’ve never had time for that. That’s all bullcrap to me.”