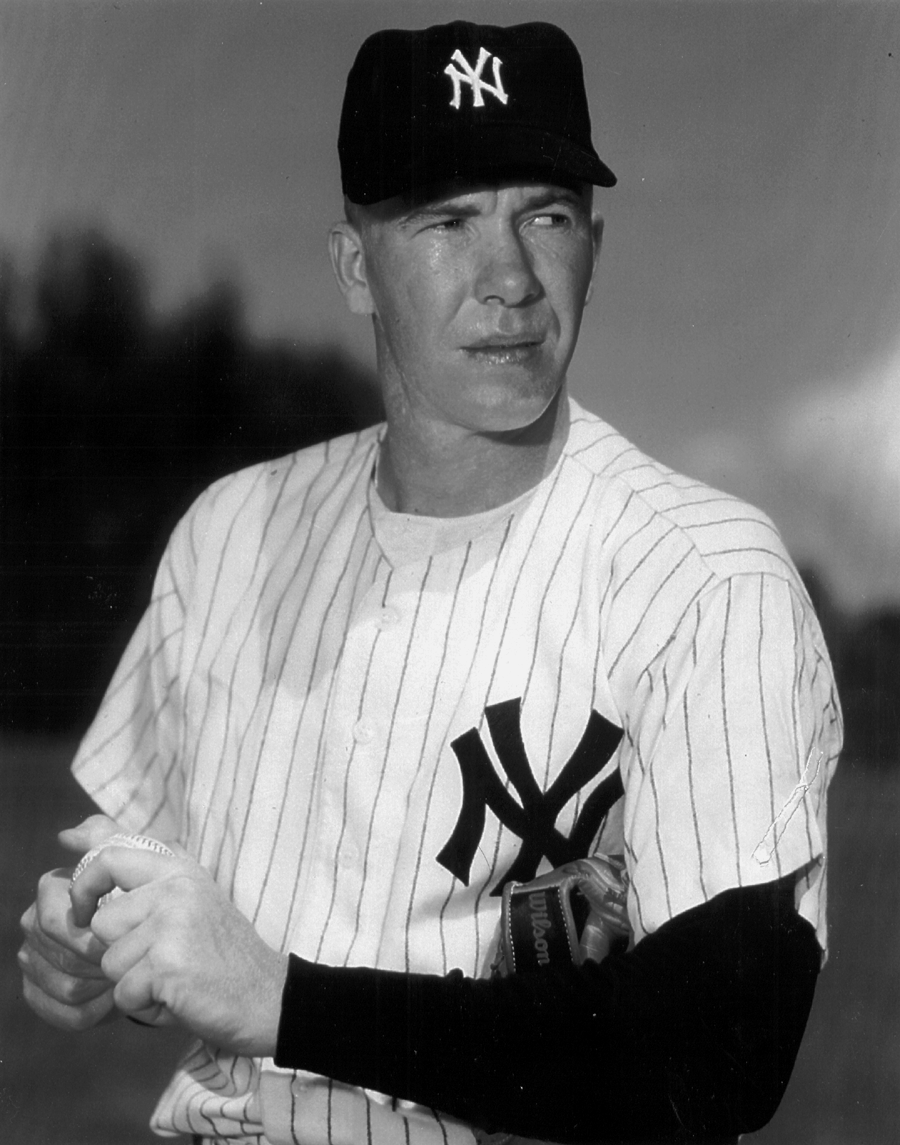 Kuzava, a native of Wyandotte, Michigan, began his big league career with the Cleveland Indians. But he made his name, thanks in part to an injury, with the New York Yankees. In 1951, Kuzava was property of the Washington Senators. The previous season he had suffered a torn Achilles tendon and, following surgery, was on crutches when the Senators traded him to the Yankees for three pitchers and $100,000. A starter his entire career, Kuzava was moved to the bullpen by the Yankees because they were in desperate need of a left-handed reliever. The move paid off as Kuzava saved Game 7 in both the ’51 and ’52 World Series. This gives him the distinction as the only pitcher in major league history to save back-to-back Game 7 victories. In ’51 he retired the Giants with the bases loaded for the win and in ’52 he set down the last eight Dodgers to secure the championship. Overall, Kuzava pitched 12 seasons in the majors (1946-57) for eight different teams ending his career with the St. Louis Cardinals. He appeared in over 200 games as a starter and reliever and compiled a 49-44 record and a 4.05 ERA.

Injuries are part of every sport and the one Bob Kuzava suffered in the spring of 1951 changed his career in ways he still doesn’t quite understand.

Kuzava, who was born and raised, and continues to live in Wyandotte, pitched for parts of two seasons with the Cleveland Indians, but spent mote time with AAA Baltimore in the International League. He started just six games for the Indians, a team loaded with great pitchers like Bob Feller, Early Wynn, Bob Lemon, Steve Gromek and Allie Reynolds, before Cleveland traded him to the White Sox before the ’49 season. He pitched well that first season finishing 10-6, strictly as a starter, but remained in relative anonymity until fate stepped in.

Early in the ’50 season Chicago traded Kuzava to Washington and it was with the Senators when Kuzava got his break. As he raced to first base in an attempt to complete a double play, Nellie Fox of the White Sox stepped on Kuzava’s foot and tore his Achilles tendon.

In June of ’51, with Kuzava on crutches recovering from the injury, the Senators traded him to the Yankees for three pitchers and $100,000. New York was in need of a lefthander and rolled the dice on Kuzava’s left arm. There was on problem. George Weiss, the Yankees’ general manager didn’t know the extent of Kuzava’s injury at the time of the trade.

“He wanted me to pitch, right away,” Kuzava said. “I told him I couldn’t, that I was still on crutches. He said “What?” He got to New York and they had three docs look at me. When I started to get better Jim Turner, the pitching coach, told me to get ready quick and that’s how I got to the (bull) pen. I was a spot starter for them, but mainly I was their left hand closer; Allie Reynolds was their right hand closer.

“I didn’t think that trade would stand up. I was damaged goods.”

The trade paid dividends immediately for the Yankees as Kuzava went 8-4 that season in New York and saved Game 7 in the World Series against the New York Giants. The next season he again saved Game 7 this time against the Brooklyn Dodgers.

For Kuzava pitching for the Yankees was an opportunity of a lifetime. To be on the same staff as Whitey Ford, Vic Raschi, Eddie Lopat, Tom Morgan, Reynolds and others helped to make Kuzava’s career one to remember.

“It’s hard to believe” Kuzava said. “Coming from a little town like Wyandotte”.

Kuzava ended his career with the St. Louis Cardinals in ’57. He pitched in 213 games and had a 49-44 record with a 4.05 ERA. He saved 68 games during his tenure with the Yankees that also included a third championship ring in ’53

Kuzava remained in baseball following his retirement as a player. For 10 years he scouted for the Braves and the Athletics, and it was with the A’s that Kuzava, working for Charlie O. Finley, attempted to sign a right-hander from Detroit’s east side, Dave DeBusschere.

“He was offered $70,000 by the White Sox,” Kuzava said. “But our budget was gone. Finley was busy signing players like Reggie Jackson at the time. He called me on Easter Sunday and I told him we were out of cash, so he went with the White Sox.”

Kuzava, who graduated from St. Patrick High in Wyandotte in 1942, has much to be proud of from his years in baseball, and in life. He served in the armed services for three years (1942-45), there’s a baseball field named after him in Wyandotte, he played with Mickey Mantle and Joe DiMaggio, and now the Polish-American Sports Hall of Fame is honoring him.

“I just worked hard and loved the game,” he said. “I got married in the service and had a family to support. I just wanted it bad”.