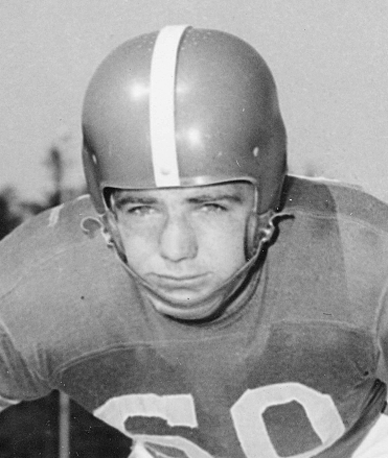 Kush capped a brilliant collegiate football career in 1952 by being named an All-American as his Michigan State team went undefeated in nine games and won the National Championship. A native of Windber, PA., Kush played his first two seasons as a 5-foot-9-inch, 185-pound defensive lineman as the Spartans compiled won-lost records of 8-1 and 9-0. He played both offense and defense in his senior season and was selected to play in three post-season bowl games – the North-South in Miami, Senior in Mobile and the college All-Star classic in Chicago. Kush then turned his attention to coaching football and only six years later, at age 28, was named head coach at Arizona State University. In 22 seasons (1958-79) he guided the Sun Devils to 176 wins, only 54 losses and one tie. His teams were unbeaten in 1970 and 1975 and had only one losing season. He was named “Coach of the Year” in 1975. He was later elected into the national Football Foundation College Hall of Fame. Kush ventured into professional football as coach of the Hamilton Tigercats of the Canadian League. He went to the Baltimore Colts as head man in 1983 and 1984 and moved with the team to Indianapolis in 1985. Kush concluded his coaching career with one season (1986) with the Arizona Outlaws of the USFL.

Following his days at MSU and Army service, Kush emulated Munn, Daugherty and Devine with his own head-coaching career, a 22-year highly successful stint at Arizona State University. In 1995, Kush achieved his highest honor with induction into the same Hall of Fame to join the trio of coaches so important to him at MSU.

Frank, born in 1929, was one of 15 children of parents who came to America in 1906 from Lesko, Poland. His father, a coal miner, died when Frank was 14, and the youngster worked before and after school to help support the family. But he found time to play football at Windber Area High School where he lettered at offensive guard in 1945 and 1946 and as an offensive tackle in 1947. He climaxed his senior year by gaining All-Pennsylvania honors. He excelled as a student as well, and was his class president each of those three years.

College football beckoned and Kush first enrolled at Washington and Lee University, but after one semester transferred to Michigan State at a time the Spartans were rapidly becoming a national powerhouse. At 5-foot-9-inches and 185 pounds, he played defense during the 1950 and 1951 seasons, years in which State went 8-1 and 9-0, the latter unit ranking No. 2 in final season listings. And then in 1952, he played offense and defense as the Spartans compiled a perfect 9-0 season and top national ranking. Explosive speed and lightning-like reactions were among his prime strengths as a player.

Frank retains many fond memories of his Spartan days. “Our 36-33 win over Notre Dame at South Bend in 1950 was a classic for me. It was televised and people back home were able to watch it.” Equally big was the 35-0 trouncing handed Notre Dame in 1951 along with three straight wins over archrival Michigan. “We had some great players on those teams, people like halfback Don McAuliffe, lineman Dick Tamburo and linebacker Doug Weaver.” Following his final season, Kush played in the North-South game in Miami, the Senior Bowl in Mobile, and the College All-Star game in Chicago. The year after Kush completed play, State competed in its first Big Ten season, extended its winning streak to 28 games, won a share of the conference title and beat UCLA in the 1954 Rose Bowl game.

Also important to Frank was meeting MSU student Frances Theroux of East Lansing, daughter of an MSU faculty member. They were married in 1955 and raised three fine sons.

After his graduation from State with a B.S. degree in education, Kush spent two years in the Army at Fort Benning, Georgia, as a first lieutenant in an infantry unit. He also served as player-coach of the post’s championship football team. Following discharge from service, he started his college coaching career as line coach under Devine at Arizona State in 1955.

At the age of 28, Kush in 1958 was named to succeed Devine as head coach when Dan moved on to Missouri. His record over the next two decades was outstanding, with a mark of 176 wins, 54 losses and one tie and unbeaten campaigns in 1970 and 1975 and just one losing season.

His teams often were not as big as the opponents, but they usually were quicker and better conditioned. Seldom did Kush’s teams lose a late lead. And year after year, Kush managed to come up with some of the nation’s best skill-position players (Charley Taylor, Ben Hawkins, J.D. Hill, Woody Green, Danny White, Art and Ben Malone, John Jefferson). In a six-season span, from 1970 to 1975, his teams fashioned a 62-9 record including a 5-0 mark in bowl games. The capper was in 1975 – a 12-0 season, a Fiesta Bowl win over Nebraska and a consensus #2 ranking (#1 by Sporting News).

After the fine season of 1975, Kush was named Coach of the Year by the American Football Coaches Association and by the Walter Camp Foundation.

Frank was renowned for winning games. But he was just as famous-to some infamous-for how he won. He was the legendary taskmaster, the hard-nosed drill sergeant of a coach from the old school. You either did it his way, or you got out of the way. He carved a football training site out of the remote mountains at Camp Tontozana to avoid the coach’s bane-distractions. Whatever Kush did in terms of discipline and coaching, it certainly proved effective over the years. Seven teams played in post-season bowl games. A total of 128 athletes coached by Kush were drafted by NFL, AFL and World Football Leagues. Ten were first-round draft choices. Thirty Sun Devil players coached by Kush earned All-America honors. A special thrill for Frank in 1975 was the placekicking work of son Dan, who in the great victory over Nebraska in the Fiesta Bowl kicked three field goals.

Kush concluded his Arizona State coaching career in 1979 but was still not finished with football. He ventured into professional ball in 1982 as coach of the Hamilton Tigercats of the CFL. Then he went to the Baltimore Colts as headman in 1983 and 1984 and stayed as the franchise moved to Indianapolis in 1985. In 1986 he coached the Arizona Outlaws of the USFL in his final coaching position.

Now, Frank is the executive administrator of the Arizona Boys Ranch for troubled youths near Queen Creek, located southeast of Phoenix. The Ranch serves over 400 youngsters and is designed to meet the needs of behaviorally troubled boys.

Many of his former Sun Devil student-athletes still fondly recall their coach. “Frank Kush was able to get out of me something that no one else could get,” said Danny White. “He affected hundreds of athletes that he coached in that same way.”

Reggie Jackson, during his Baseball Hall of Fame speech, said: “I came to Arizona State on a football scholarship and I shall always be indebted to Frank Kush for instilling toughness in his players. He was tough as Charlie Finley and George Steinbrenner rolled into one.”

A wonderful last hurrah for Frank at ASU came in September of 1996. A Frank Kush Tribute Endowment was established to help provide Sun Devil student-athletes with the resource support they need for lifelong success. And the field at Sun Devil Stadium was renamed Frank Kush Field.

The game that night matched Arizona State and mighty Nebraska and the home team responded with a 19-0 trouncing of the Cornhuskers. For Kush, it was a day to remember.