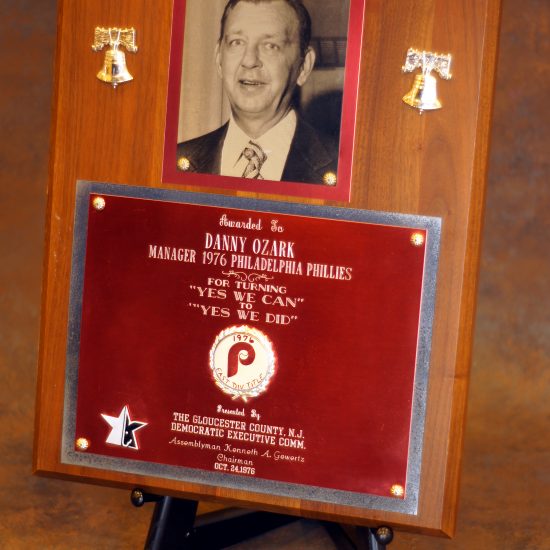 Danny Ozark (Orzechowski) began his managerial career in 1956, following a playing career in the Brooklyn Dodgers system. Ozark honed his trade under the tutelage of Walter Alston, while serving for eight years as a coach for the Los Angeles Dodgers. In 1973, Ozark was hired to manage the last-place Philadelphia Phillies. Showing steady improvement for three years, Ozark’s Phillies broke through in 1976 with a club-record 101 wins, to capture the first of three consecutive National League East Division Championships (1976, ’77 and ’78.) In 1976, Ozark was selected as Major League Manager of the Year by the Sporting News, and also earned the Associated Press National League Manager of the Year award. Ozark’s career managerial record with the Phillies stands at a solid 594-510.

It’s not often that someone is fired for being too nice. But that once happened to late Philadelphia Phillies Manager Danny Ozark.

“If Danny Ozark had one fault,” former Phillies owner Ruly Carpenter told the Philadelphia Inquirer, “it was that he was too nice. He was tremendously loyal to his players. There were just times when he should have been a hell of a lot tougher on those guys.”

The “guys” Carpenter was referring to included Hall of Famers Mike Schmidt and Steve Carlton, along with baseball greats Pete Rose, Greg Luzinski and Jim Kaat, and a boat load of young talent Ozark helped mold into a winning unit.

Yet, it’s hard to argue with Ozark’s personality and managing style. He managed Philadelphia from 1973-79 and compiled a record of 594-510. The win total is third-best among all Phillies managers. His teams won 101 games in both 1976 and 1977, and 90 games in 1978. Following the 1976 season, the Associated Press and The Sporting News voted him National League Manager of the Year.

“That’s the way Danny was,” recalled Ginny Ozark, his wife of 60 years. “He used to call me from the ballpark and say, ‘I’m bringing a couple of kids home.’ I’d say, ‘How many?’ All of a sudden from five to 20 players, he’d bring the whole ball club.

“He took care of them like he was their father.”

Ozark, who died in May 2009, grew up in Cheektowaga, N.Y., a Polish suburb outside of Buffalo. It wasn’t a typical childhood.

“As a little boy, Danny traveled a lot with his aunt and uncle,” Ginny Ozark said. “As a matter of fact, Danny went with his Uncle Bill to help build Polish churches in Michigan.”

Ozark entered professional baseball in 1942, starting out as a second baseman for Brooklyn’s Class D team in Olean, N.Y. Shortly thereafter, he was drafted into the Army. Ozark landed in Europe on D-Day and received the Purple Heart in St. Laurent, France after receiving shrapnel wounds from an artillery shell.

He returned home in December 1945 after three years of service. During that time, he was unable to touch a baseball. Yet in February 1946, the Dodgers signed Ozark to a contract. The team converted him from a second baseman to first baseman. At first he was stuck behind Hall of Famer Jackie Robinson. When Robinson was moved to second base, Ozark found himself behind another long-time great, Gil Hodges.

Ozark never was called up to the big league club, even though he batted .300 in both AA and AAA and was among the league leaders in home runs every season.

In 1955, Ozark played for the Fort Worth Cats. The team had a unique distinction in which five ballplayers – Dick Williams, George “Sparky” Anderson, Norm Sherry, Maury Wills and Ozark – went to Major League managerial careers.

One year later, Ozark became the manager of the Dodgers’ Class B Wichita Falls farm club. He gradually rose through the Dodgers’ farm system and in 1963, won the division title with the Spokane Indians of the Pacific Coast League.

Ozark made it to the majors in 1965 when he was hired as a coach for Dodgers manager Walter Alston. He coached from 1965-72 until he was hired in October 1972 as the manager of the last-place Phillies at the age of 49. Philadelphia showed steady improvement in his first three seasons. The breakthrough came in 1976 by winning 101 games. The Phillies advanced to the NLCS that year and the following two seasons.

After the Phillies let him go in August 1979, he rejoined the Dodgers as one of Tommy Lasorda’s coaches from 1980-82. In 1981, Ozark helped Los Angeles win the World Series over the New York Yankees. He joined Frank Robinson’s staff in San Francisco as a coach in 1983. When Robinson was fired during the following season, Ozark served briefly as interim manager before wrapping up his career as a scout for San Francisco. Counting his Giants’ tenure, Ozark compiled a lifetime record of 618 wins and 542 losses (.533).

While he is most remembered as an easy-going clubhouse manager, Ozark also had his light moments.
One of the most memorable instances was during the 1979 season when the Phillies were slumping. Ozark decided to literally pull the lineup out of a hat. Schmidt’s name popped out first, and the Hall of Famer led off with a home run to dead center against San Francisco’s John Montefusco.

“He was a good friend, my first major league manager, played a major role in the early years of my career, and he was instrumental in building us into prominence in the mid-1970s,” Schmidt said. “He brought a wealth of baseball experience from his years with the Dodgers to Philadelphia, and we were fortunate to have him as our leader throughout that time.”

Even more unique was his folksy way of telling stories, using occasional malapropisms. Some reporters who covered Ozark’s team even suggested similarities with Yogi Berra. Among some of his famous ones were:
“Half of this game is 90 percent mental.”

“Contrary to popular belief, I have always had a wonderful repertoire with my players.”

“Even Napoleon had his Watergate.”

“It is beyond my apprehension.”

“He was the perfect manager for the Phillies in the 70s,” said former Philadelphia catcher Bob Boone. “He had the patience of Job and helped all of us grow up as men and players.”