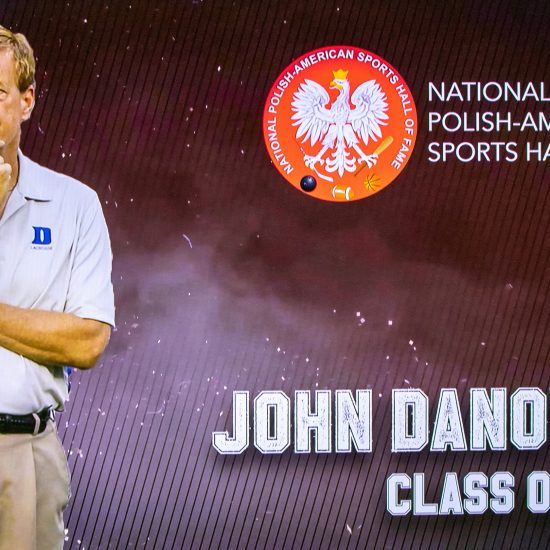 Head coach of men’s lacrosse at Duke University since 2007, after previously serving as head coach at Hofstra for 21 seasons (1986-2006). Danowski coached Duke to three NCAA championships in 2010, 2013, and 2014, and appearances in the national championship game in 2007 and 2018. He is a three-time college coach of the year earning the honors in 1993, 2010, and 2013. Danowski has won more games than any other Division 1 lacrosse coach and has a record of 399-194. He is also coach of the United States men’s lacrosse team, and led them to the gold medal at the 2018 World Lacrosse Championship.

For whatever reasons, many superstar athletes who then coach do not achieve the same success they had while competing. But some win at both. Even fewer become hall of fame coaches. One of them is John Danowski.

A record-setting NCAA Division I lacrosse player at Rutgers from 1973-76, Danowski was the maestro of the attack, both scoring and creating goals. When he wasn’t feeding teammates who lit up the scoreboard, he was ripping shots into the goal himself.

In his sophomore season against Penn State, Danowski torched the Nittany Lions for five goals and nine assists. The 14 total points and nine assists set school records. He also holds the Rutgers career assist tally at 54. Those records still stand.

Danowski was on three Scarlet Knight NCAA tournament teams and captained Rutgers as a senior. He also represented the university in the North-South all-star game.

A playing career like that is tough to follow as a coach. But over the course of Danowski’s lacrosse coaching career, which spans four decades so far, he has more than cleared the bar.

Danowski has been the head coach at C.W. Post, Hofstra, and currently coaches Duke as well as the U.S. national team. His coaching accomplishments to date include 443 victories (the most ever in NCAA Division I), three national championships, 11 Final Four appearances, 22 conference and conference tournament titles, 22 NCAA tournament appearances, and a gold medal at the 2018 World Lacrosse Championship. He’s won the F. Morris Touchstone Award as the top collegiate lacrosse coach three times, and he’ll be leading the U.S. team again at the 2023 world games in search of an unprecedented second gold medal as coach.

Those who’ve suited up for Danowski have earned several honors, including three Tewaaraton Awards (college lacrosse’s top honor), 125 All-American nominations, and even more league accolades. More impressively, his players have shined in the classroom and gone on to distinguished careers spanning many fields. Last year’s Duke squad saw nine players placed on the All-Atlantic Coast Conference Academic Team. Most recently, half of the 52-man roster had a grade point average of 3.5 or greater, 48 players had a 3.0 or greater GPA, and 24 players earned degrees (14 undergraduate, 10 graduate).

John Danowski is undeniably among the small percentage of former superstar athletes to be great at coaching too. Plus, he regularly exhibits a singular trait that reflects excellence in athletics and coaching – he makes those around him better.

Danowski credits his childhood and learning from special people as the foundational building blocks for his success. See, sports and teaching have always been a part of the family. John’s father Ed, a former pro athlete who also coached and taught, and his mother Josephine were always teachers and coaches who espoused solid fundamentals. Several lessons came at the Polish family’s gatherings over platefuls of kielbasa and sauerkraut, which Danowski happily devoured.

“My roots are founded in our faith and our heritage,” Danowski said. “I grew up in East Meadow, New York, but we went to church at St. Ladislaus in Hempstead, which is the town next door, because the service was in Polish.

“My parents grew up in Riverhead, which is also on Long Island,” he said. “When we ‘went home,’ we would visit Polish Town there and go to St. Isidore for mass. My uncle lived behind the church and some of my family even helped build it.”

His older brother, also named Ed and 14 years his senior, was a good influence too. The younger Ed was also a teacher and coach.

“I grew up around teachers and coaches. It’s all I was ever really exposed to,” Danowski said. “I think I learned a lot by osmosis that I didn’t realize I was taking in at the time.”

After 21 years as a head coach building up C.W. Post and Hofstra, an ill-fated party more than 500 miles from Long Island changed everything.

The Duke lacrosse scandal was all over the news for months. Three lacrosse players facing rape charges (which were later dropped), a coach forced to resign, and the cancellation of Duke’s season and program. Duke lacrosse’s world imploded.

Danowski’s son, Matt, was a junior superstar on that team. But at that moment, it seemed as if everything had suddenly gone to dust.

Eventually the legal process played out and the program was reinstated. But it still lacked leadership at the top.

Duke needed a teacher and a coach. Character and excellent fundamentals were critical. Only one person checked those boxes and had a son on the roster.

Drawn by the opportunity to help Matt and his teammates, and urged by wife Tricia and daughter Kate to take advantage of such a rare chance, Danowski sought the Duke job. The university’s leadership, impressed by his work at Hofstra, brought him in for an interview. It turned out to be atypical.

“It was all about culture, discipline, behavior. Nothing about recruiting, nothing about lacrosse.”

Danowski was offered the position yet had reservations – Durham isn’t Long Island, after all. But when you have a chance to help your family, you take it.

Crawling Out of the Rack

From 2007-14, Duke went to eight straight Final Fours and won three national championships, including the 2010 title and back-to-back victories in 2013 and 2014. In his 16-year Duke tenure, Danowski’s squads won 224 games, along with 12 conference regular season and tournament titles.

How’s does such excellence unfold? Culture.

One cornerstone of Danowski’s culture is “crawling out of the rack.” The concept was inspired by Father Michael Martin, the director of the Duke Catholic Center.

“He gave us this idea of ‘bleeding through,’ in that what you do in the classroom, the weight room, practice, and game day are related,” Danowski said. “It comes down to giving your best effort. That can be as a friend, a son, a student, an athlete, or anything.

All Danowski asks of his players is everything they’ve got. And they’re happy to oblige.

The Blue Devils didn’t finish 2022 as they wanted, having been eliminated from the postseason. But history says they’ll be back, likely crawling out of the rack to get there.

“Greatest Honor of My Life”

John Danowski still coaches at the highest levels after a tremendous playing career. Admitting he’s not a “hall of fame type guy,” his tone shifts when it comes to the National Polish-American Sports Hall of Fame. For Danowski, this one is special. “Finding out I was being inducted was stunning…mind blowing really,” Danowski said. “It means a lot. It’s the greatest honor of my life and my parents would be so proud.” Everyone who helped mold Danowski along the way should be proud. He’s making the most of the lessons.