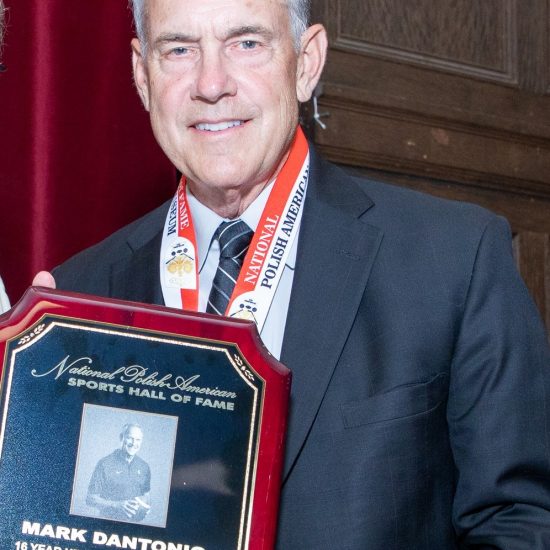 Head football coach of the Cincinnati Bearcats (2004-2006) and the Michigan State Spartans (2007-2019), Dantonio finished his career with a record of 132-74. During his time in East Lansing, he compiled an impressive list of accomplishments including three Big Ten Championships, two victories in the Big Ten Championship Game, victories in the 2014 Rose Bowl and the 2015 Cotton Bowl, and an appearance in the 2015 College Football Playoff. Dantonio finished his career as the winningest football coach in MSU history (114-57), and was twice named Big Ten Coach of the Year. Dantonio won more Big Ten Championships (three) and bowl games (six) than any other coach in school history, while also ranking first with 12 bowl appearances.

In the second grade in Zanesville, Ohio, the football career of Mark Dantonio was born.

He played through middle school into high school and eventually at the University of South Carolina as a defensive back. His playing career ended, but his football journey was just beginning.

“I started thinking I would go into education, be a teacher and a coach,” Dantonio said. “But then I started coaching college at the University of South Carolina and thought, ‘Hey, that would be a pretty good job.’ So, at that point I started trying to figure out how to get into it, caught one year in high school and then became a grad assistant.”

The rest is history.

The coaching career of Mark Dantonio spanned over 40 years and was highlighted by a National Championship as a defensive coordinator with Ohio State University, two Big Ten Coach of the Year awards, three Big Ten titles and ending as Michigan State’s winningest head football coach in the program’s history. Dantonio can now add National Polish American Hall of Fame inductee to his long list of accolades.

“It was very humbling. Very humbling to be chosen and be on the ballot and then to be chosen as one of the recipients,” Dantonio said. “It’s something that I’ll carry with me and it’s an honor that will stay with me and my family. I’m very appreciative of the honor. The fact that it represents my mom’s side of the family is special.”

“I think everybody that I’ve come in contact with at any part during my coaching career, my path, had an impact on me,” Dantonio said. “Our athletic director at Cincinnati, Bob Goin, had a big impact on me. Certainly, Nick (Saban) and Jim Tressel, Dean Pees, Dom Capers, Jim Young I worked for at Purdue, Earle Bruce, these guys are legendary coaches, hall of fame coaches and they’ve all impacted me. I sort of took what I wanted from a little bit of them and a little bit of me and sort of just shape our philosophy.”

Dantonio landed his first head coaching job at the University of Cincinnati in 2004, a position he was not seeking at the time.

“I was coming from Ohio State as a coordinator. I had been there for three years and really was not looking to move,” Dantonio said. “I was pretty stable at that position. It was going to take a special situation and I found that in the athletic director (Bob Goin).”

As head coach, Dantonio led the Bearcats to a second-place finish in Conference USA play and won the PlainsCapital Fort Worth Bowl over Marshall in his first season. He would go 18-17 over three seasons with Cincinnati before Michigan State came calling.

“It was a chance to go back to Michigan State where we’d been for six years, where my girls had grown up, my wife had friends there, so it was an easy move from perspective because we knew the situation,” Dantonio said. “We knew the landscape, knew all the nuances, so we had sort of a head start in terms of what other people would’ve had because we’d been there before, we knew people so it was an easy adjustment. It was a place I felt if we went there that I would finish my coaching career there, which I was fortunate to do that, be there 13 years.”

Over those 13 years at Michigan State, Dantonio would lead Spartan football back to relevancy and some of the biggest moments in program history, moments that are impossible to rank, but were just as important as the next.

“I’ve been asked that question by a couple people lately and I really cannot say that there’s a top three or five or whatever it is, there’s so many different games or moments that propelled us forward in those 13 years,” he said. “Along the way there were a lot of moments. We had some success. A lot of people are involved in that success, players and coaches alike, and to say hey this is the one piece, the one play would be shorting other people out, so I try to keep it pretty broad. I could probably give you 20, but I can’t say there’s one moment. What we worked towards was winning the Big Ten Championship outright and we had part of it in ‘10 and outright in ‘13 and ‘15 and those were always the goals because doing that would send you to the Rose Bowl in ‘13 and the College Football Playoffs in ‘15. Those were the ultimate goals for us.”

Though Dantonio’s successes on the field were what ultimately defined him and any coach, the connections he made with his players and coaches is how he hopes to be remembered.

Dantonio still gets his “football fixes,” but he is enjoying retirement and spending time with his grandchildren and family.

“Still follow college football,” he said. “I get my football fix by going to some practices. I’ll probably go around in August again. Last year I went to about five places, still have people at various places that I know so I can go and get a little football fix and then leave. But like I’ve said, ‘Retirement’s nice, everybody should try it at least one.’”