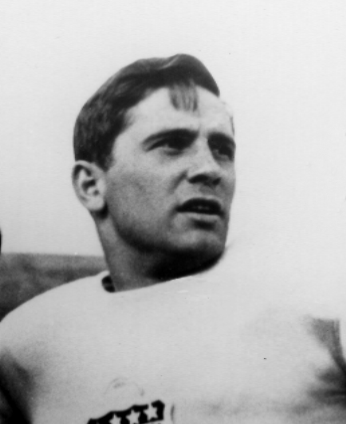 A native of Pennsylvania, Lujack was an All-American quarterback who led Notre Dame to national titles in 1946 and 1947. In 1943, as a sophomore, he replaced QB Angelo Bertelli, who left for the service, five days before the Army game. Lujack tossed two TD passes, ran for another to pace the Irish to a 26-0 triumph. He won the Heisman Trophy in 1947 and was named “Athlete of the Year” in 1947 by the Associated Press. Lujack was also voted the top college QB of the quarter-century. He led the NFL in passing as signal-caller for the Chicago Bears.

John (Luczak) Lujack, Jr. was born on January 4, 1925, in Connellsville, Pennsylvania, the fourth of six children.

Johnny started as a quarterback at age 13 for Cameron Junior High. He then played varsity football for three years at Connellsville High School.

Upon graduating high school, he was offered an appointment to the U.S. Military Academy at West Point as well as scholarship offers from many colleges. But Johnny turned them all down for his only interest – Notre Dame University.

Before 78,000 fans at Yankee Stadium, Lujack proved himself under pressure. He tossed two touchdown passes and carried for another, pacing the Irish to a 26-0 triumph. Notre Dame went on to win the national championship during the ’43 season.

Lujack was also called into military service following the ’43 campaign and served on a sub chaser. He missed the ’44 and ’45 seasons at Notre Dame.

Following the war, Lujack returned to South Bend to resume his collegiate football career. And it proved to be quite a career. Johnny led the Irish to back-to-back national championships in 1946 and 1947. During these two years, Notre Dame compiled a 17-0-1 record. Fellow NPASHF honorees Leon Hart and Ziggy Czarobski were teammates of Lujack’s on the ’47 team.

Lujack was a brilliant passer and runner, was equally as good as a defensive back, and even punted and kicked extra points for the Irish. For his career as a starting quarterback, Johnny compiled a 26-1-1 record. He was a unanimous All-American in ’46 and ’47.

In the 1946 Heisman Trophy balloting, Lujack finished third behind Army’s Glenn Davis and Georgia’s Charley Trippi. In 1947, he won the Heisman Trophy as the nation’s outstanding college player. He was also named Associated Press “Athlete of the Year.”

Johnny was one of the most publicized college players of all time. During his senior year at Notre Dame, his picture appeared on the cover of 27 different magazines!

Lujack was drafted in the first round by the Chicago Bears in 1948. Sid Luckman was still the quarterback, so Johnny started as a member of the defensive unit. He was an instant success with the fans. He intercepted passes and made spectacular tackles.

George Halas was sure Lujack would have a long career like Luckman’s, so he traded back-up quarterback Bobby Layne to the Detroit Lions. In 1949, Johnny led the NFL in pass attempts, completions, yards gained and touchdowns. Lujack was also a master at pass defense and handled the kicking duties as well. The Bears missed the Western Conference title honors by only a half a game.

In October, 1949, Lujack completed 29 passes against the tough New York Giants defense. Later that season, he passed for a record 468 yards and six touchdowns against the Chicago Cardinals.

With the Bears, he led the team in scoring each of the four years he played and made eight interceptions as a rookie. He was in the Pro Bowl in his last two years.

In 1960, Lujack was elected to the College Football Hall of Fame. He was also voted as one of college football’s top 100 players of all time.

Tackle of the Century!

On November 9, 1946, the two of the greatest college football teams of the post-war era battled to a scoreless tie in a game that transfixed an entire nation in anticipation and left it replaying the outcome for many years to follow. When this Notre Dame-Army game is mentioned, one play is always recalled: Johnny Lujack of the Irish tackling Army’s Doc Blanchard in the open field.

In the third quarter, Blanchard, Army’s powerful fullback, burst through the Irish line, drove through the secondary, and seemed to be on his way. He had only one man to beat: Lujack.

Lujack cut across the field toward him driving Blanchard for the sideline. As Lujack reached him, Blanchard slowed, then accelerated powerfully in an effort to smash through Lujack’s grasp.

But Lujack was too tough. He hit Blanchard head-on in a violent collision that drove Blanchard down on the Notre Dame 36. The Yankee Stadium crowd of 74,121 cheered the dramatic highlight.