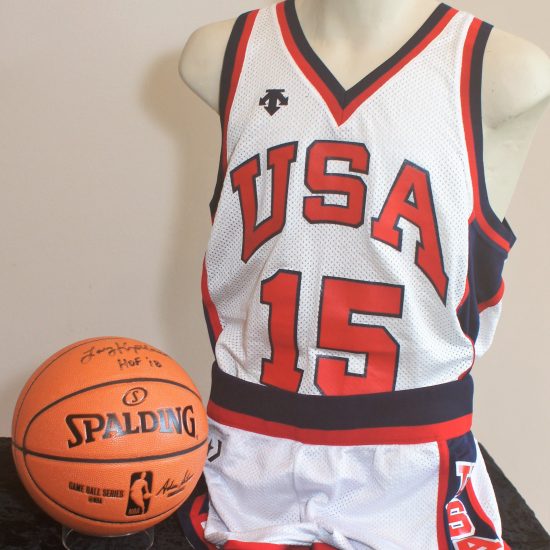 The 6’ 9” forward attended the University of Montana and holds the school records for points and rebounds in a career.  The only Big Sky conference player to be named conference MVP three times (1984-’86), and the only player in Montana’s history to have his number retired, Krystkowiak was a two-time GTE Academic All-American.He was selected by the Chicago Bulls as the 28thplayer in the ’86 draft. Playing nine seasons in the NBA, Krystkowiak averaged eight points and five rebounds per contest.  After his playing days, Krystkowiak became a successful coach.  He spent one year as head coach in the CBA, and the next two years he guided his alma mater to two conference championships and two NCAA tournament appearances.  In 2006, Krystkowiak left Montana to pursue NBA coaching opportunities, accepting assistant coaching duties with the Milwaukee Bucks, before being elevated to Head Coach in 2007. Returning to the college coaching ranks in 2011, Krystkowiak recently entered his 8thseason as Head Coach at the University of Utah, having led the once-struggling Utes to a 137-96 record, and 5 consecutive NCAA or NIT tournament selections, including the NIT Finals in 2018.

Working nonstop is second nature for Larry Krystkowiak and without his strong work ethic it’s doubtful he would have achieved all he has to this point in his life.

Krystkowiak, 53, played nine seasons in the NBA after graduating from the University of Montana where he enjoyed an outstanding career playing for Coach Mike Montgomery, who would later coach at Stanford and in the NBA.

Krystkowiak just completed his seventh season as head coach at the University of Utah as the Utes reached the NIT finals losing to Penn State. When told of his induction into the National Polish-American Sports Hall of Fame, Krystkowiak said the word, Polish, meant more to him than the word, Sports.

Born in Shelby, MT, Krystkowiak and his only sibling, an older brother, Bernie, lived in a number of cities and towns in Montana as their father’s occupation (railroads) was often transient. Krystkowiak’s mother, Helen, was of Scandinavian decent, and his father, along with his seven siblings, was born in Poland. In 1949 his grandparents came to the U.S. with their eight children in search of a better life.

Krystkowiak recalls the stories his father, Bernard, and grandparents told of the hardships and displacements the Krystkowiaks endured as the result of WWII.

“It was in 1940 when the German military, at 2 a.m., told them they had an hour to grab what they could and go,” Krystkowiak said. “Some were taken into Germany and were placed in group work camps. Casey, at 22, was the oldest and he worked in a factory. Others were moved into displacement camps during the war.

“Then my grandparents jumped in a boat with their children and came to New York. From there they took a train to Wisconsin, then Minnesota and eventually to Montana.

“All of them, my father and brothers and sisters, they all worked hard. That’s what struck me. I don’t find many of Polish decent who were lazy. Two of my uncles worked on the railroads, another went to work for Lockheed-Martin and some went on to California.”

Whether it was the time he spent in Shelby or Essex or Great Falls, Krystkowiak, with a push from his late mother, gravitated toward the game of basketball at an early age.

After graduating from Big Sky High in Missoula, Krystkowiak received about a dozen scholarship offers and chose Montana. Jud Heathcote, before his days at Michigan State, had built a strong program there and Krystkowiak didn’t want to stray too far from home so the choice was pretty much a no-brainer.

“Heck, they paid for everything,” he said. “If not for that, I probably would have gone into the military.”

At 6-9, (eventually would grow to 6-10) Krystkowiak became a dominant player for the Grizzlies. He continues to hold school records for career points (2,017) and rebounds (1,105).Krystkowiak is the only person to have been named Big Sky Conference MVP three times (1984–1986).

Selected by the Chicago Bulls in the 2nd round as the 28th overall pick of the 1986 NBA draft, Krystkowiak spent most of his career with the Milwaukee Bucks. He also played for the San Antonio Spurs, Utah Jazz, Orlando Magic, Chicago Bulls and Los Angeles Lakers. His best season was in 1988–89 for Milwaukee when he averaged 12.7 points, 7.6 rebounds and 1.3 assists. For his career, Krystkowiak averaged 8.1 points and 4.9 rebounds per contest.

Initially, Krystkowiak hadn’t thought about coaching as a second career. He took his degree in business and served an internship with Merrill Lynch with the idea he would go into real estate.

Then, in 1998, he received an offer from Montana coach Don Holst to become a volunteer assistant and Krystkowiak decided to give it a shot. It changed his life. He stayed at Montana until 2000 when he became an assistant coach at Old Dominion.

“What paid off was having had great coaches that I played for along the way,” he said. “I learned a lot from those people. I realized I liked it. I realized I was good at it.”

After one season at Old Dominion, Krystkowiak got his chance at being a head coach for the Idaho Stampede of the CBA. That season (2003–04) he guided his team to the CBA championship game. Then it was back home for a third time as he was hired as the head coach at Montana. The Grizzlies reached the NCAA tournament in each of his first two seasons and in 2006 Montana upset No. 5 seed Nevada in the first round.

That success led to a coaching position in the NBA. Krystkowiak returned to Milwaukee in ’06 as an assistant under Terry Stotts. Late that season Stotts was fired and Krystkowiak took over. He signed a 4-year contract with the Bucks and in his NBA head coaching debut on March 15 the Bucks defeated the San Antonio Spurs, 101-90.

A little over a year later, Krystkowiak was fired and in July of 2010 he was hired by the New Jersey Nets as an assistant. He spent one season there before returning to the collegiate level as head coach at Utah.

And after seven seasons it appears Krystkowiak has found a home. Twice the Utes have made the NCAA Tournament and in 2014-15 Utah reached the Sweet 16 before losing to Duke. This past season he guided Utah to its first NIT final in 44 years.

“I enjoy what I’m doing (at Utah),” he said. “It’s the right level. With five kids of my own, college is a little more under control than in the NBA. Most of (the hectic schedule) is during the summer.

“Where that work ethic and drive comes from, I haven’t really thought of. I’d like to think a lot of it is DNA. When I look back at my family, you didn’t see many take days off. You were taught the right way.”

He and his wife, Jan, live in Salt Lake City and have five children, three boys and twin girls, Samantha and Finley, age 10. They all play sports; basketball for the boys, basketball and volleyball for the girls. The oldest, Cameron, is 6-9 and attends Northfield Mount Hermon Prep in Massachusetts. One would expect to find him on a Division I collegiate roster soon.

“I didn’t push them, I never pushed them,” he said. They seem to be really driven.”