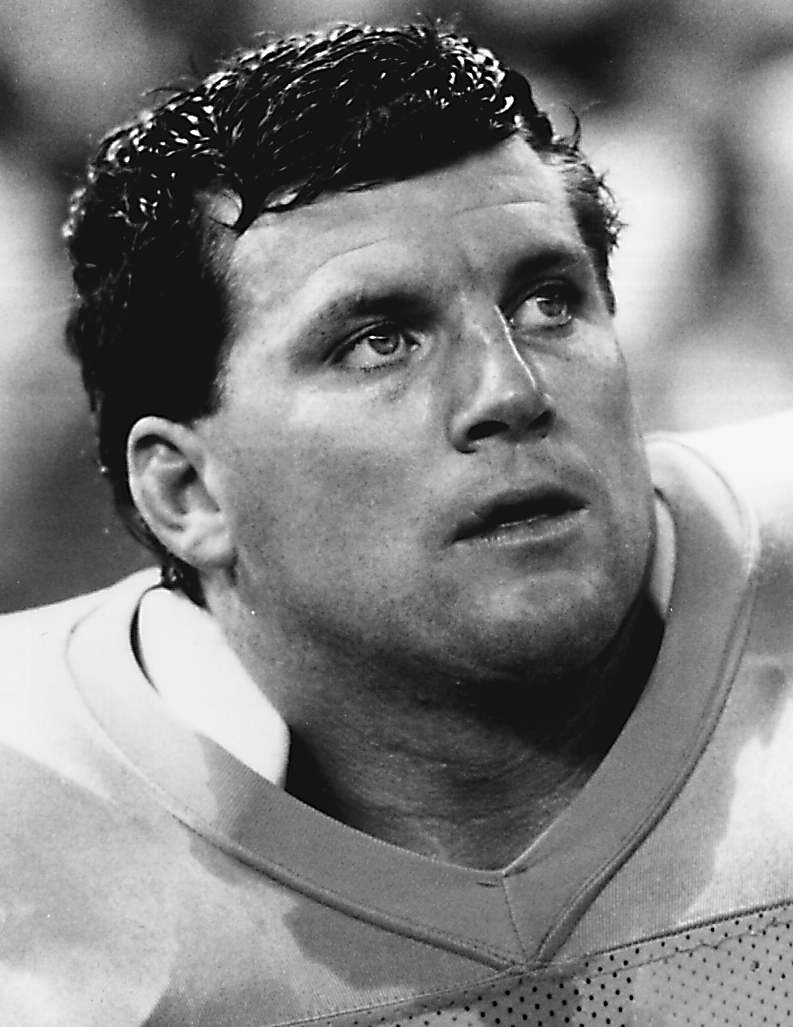 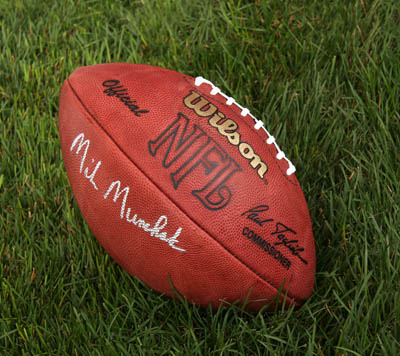 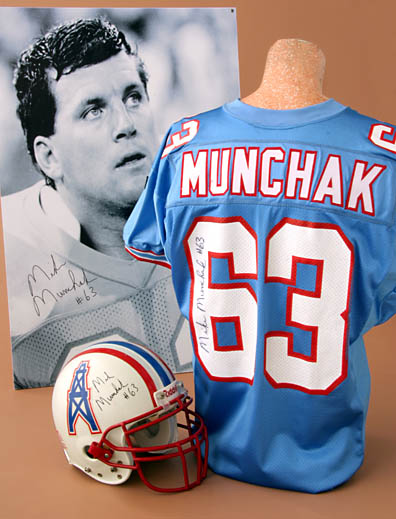 In 2001, Munchak became the 27th offensive lineman to be inducted into the Pro Football Hall of Fame. He spent his entire career (1982-93) playing offensive line for the Houston Oilers. A devastating run blocker, he earned nine Pro Bowl appearances and was named to the All-Pro team in ’87, ’88 and ’89. He also earned second team honors from ’83-85 and from ’90-93. The NFL named Munchak to its 1980′s All-Decade Team. A native of Pennsylvania, he played fullback and linebacker at Scranton Central High. He went on to Penn State to play for legendary coach Joe Paterno. He earned All-American honors for the Nittany Lions as a center and guard and was the Oilers’ No. 1 draft pick in 1982. Munchak is one of four Oilers to have his number (63) retired by the club.

When you think of the National Football League, it’s not very often the conversation centers around offensive lineman. There’s the star quarterbacks, dashing running backs, flash receivers, ferocious pass-rushers, and even daring defensive backs. Yet it’s the guys up front on the offensive line that deserve more attention. Mike Munchak is one of them.

One of only 27 offensive linemen – illustrating the point – inducted into the Pro Football Hall of Fame, Munchak adds another significant honor to his many by his induction into the National Polish-American Sports Hall of Fame. The devastating blocker is now earning the recognition he’s long deserved after a standout 12 year NFL playing career, all with the Houston Oilers.

The current assistant coach for the Tennessee Titans (formerly Houston Oilers), Munchak was a fierce competitor on the field. He put hits on opposing linebackers, defensive back and defensive linemen that would make any coach and teammate proud. You knew when playing the Oilers that Munchak was the guard to watch – and try to get around – if you wanted to win the battle in the trenches.

In his 2001 Pro Football Hall of Fame acceptance speech, Munchak called himself “some blue collar guy” from Scranton, Pennsylvania, where he was born on March 5, 1960. “Going all the way back to Pop Warner league days, my interest in football was fostered by a group of neighborhood dads, including my own, who formed to coach our team, the Scranton Apollo’s (they) and my dad taught me the fundamentals of the game and they made it fun.”

He played fullback and linebacker in high school at Scranton Central and is grateful for the instruction received from Head Coach Moe Decantis and Assistant Coach Ed Chase. Each was a “positive influence” on this teenager who needed further development and extra guidance.

“The, on to Penn State,” said Munchak. “I had the opportunity to play for the great Joe Paterno. Joe was determined to find my niche and he moved me from tight end, he said I wasn’t quick enough. I was there one day! (Then) to defensive tackle. I was a little too slow to play there. He moved me out three days later to offensive tackle. I was a little short for him. (Then) to center. I’m not really sure why he moved me out of there. And then finally to offensive guard. And so I thank Joe again for finally finding me a home.”

Munchak thanks his position coach at Penn State – Dick Anderson – for individual attention on techniques of the position which make Mike a better player and one scouted by pro scouts at Nittany Lions games. Munchak teamed with Sean Farrell to give Penn State two of the top offensive linemen in the college ranks. Mike started every game of his senior season at guard.

One of the players he faced in practice was Matt Millen, now president and CEO of the Detroit Lions, and the person selected to introduce Munchak at this induction dinner.

Munchak was eligible to play for the Nittany Lions in 1982 (he had been redshirted in 1980), but his receiving of a college degree (B.S. in business logistics) permitted him to come of for the 1982 draft. The future Hall of Famer was a first-round draft pick by the Oilers – owned by Bud Adams. He was the first offensive lineman selected in the draft and the eight overall selection.

Munchak said it was a “lineman’s dream” to block for Hall-of-Fame rusher, Earl Campbell. Munchak won the starting left guard position as an Oilers rookie and went to play 12 seasons (1982-93) and 159 games (156 starts) for Houston. His playing weight was 284 pounds and height 6-3. Mike is grateful to his position coaches, former Oilers Assistants Bill Walsh, Kim Helton and Bob Young.

“Each (coach) with their own unique styles, they taught me how to prepare mentally and physically for life in the trenches. Their guidance is what allowed me to become the player that I was. I’ve incorporated their techniques and philosophies into my coaching today.”

Munchak played with a work ethic that makes all Polish-Americans proud. He has demonstrated that hard work, determination and excellent skills can carry a player to a new level of competence in professional sports. Behind the Munchak-led offensive line, Houston led the NFL in total offense in 1990 and passing offense in 1990 and 1991. In ’91 the Oilers offensive line finished second in the AFC and fourth in the NFL in the fewest quarterback sacks allowed. His Oilers teams had seven consecutive playoff appearances (1987-93).

He was chosen in 1989 to the Oilers ’30th Anniversary “Dream Team”. Mike announced his retirement on July 12, 1994. It was immediately announced by Adams that Munchak’s jersey (#63) would never be worn again by an Oilers players. Mike had his uniform retired on November 6, 1994 on “Mike Munchak Appreciation Day.” His was only the fourth jersey in Oilers history to be retired (Earl Campbell’s #34, Jim Norton’s #43 and Elvin Bethea’s #65 are the others).

One of the greatest Oilers/Titans of all-time, Munchak joined the club’s front office in 1994, assisting the offensive coaching staff and providing quality control. He was later promoted to offensive line coach in 1997 under Head Coach Jeff Fisher.

Mike is grateful to his “tight-knit family” of Oilers teammates for a wonderful 12-year career with the same team, something rare in these days of free agency and movement from one city to the next! He’s also proud of the love and support demonstrated by his parents, five sisters, wife Marci, and daughters Alexandria (16) and Julie (15) – the “loves of my life”.

Munchak has given back to the communities through activity work for Big Brothers/Big Sisters, Leukemia Society, United Way, and others.