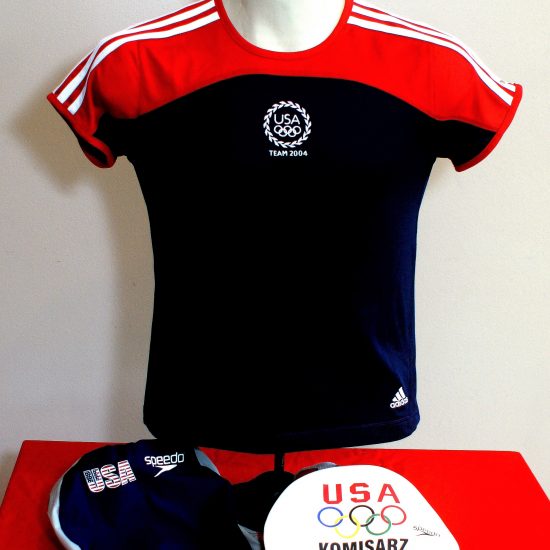 Rachel Komisarz-Baugh was like every other little girl watching her hero, Mary Lou Retton, on television in 1984 during the Summer Olympics in Los Angeles, CA.

A member of the United States Women’s Gymnastic Olympic team, Retton captured the hearts of Americans and five medals, including one gold in the individual all-around gymnastics competition.

Komisarz-Baugh was inspired and the fire of capturing Gold as an Olympic athlete was lit.

“I think everybody when you are young thinks, ‘I’m going to be an Olympic athlete,’” she said. “When I was eight years old I cut my hair like Mary Lou Retton because she was the queen of the sport at that point and I wanted to be just like her.”

Komisarz-Baugh never made it as an Olympic gymnast, but her dreams of becoming an athlete on the biggest of stages were achieved as a Gold and Silver Medalist Team USA Olympic swimmer. Her successes are being honored once again.

A record-tying five-time World University games medalist and World Champion swimmer, Komisarz-Baugh will be inducted into the National Polish-American Sports Hall of Fame, becoming just the fourth swimmer welcomed to the Hall of Fame.

“I was just ecstatic,” Komisarz-Baugh said. “To be inducted in the Polish American Hall of Fame, words really cannot explain. I know what my family and everybody went through coming to the United States and to be able to represent my heritage and my culture.

“It’s kind of interesting, but my grandfather passed away two years ago and his funeral was actually hosted at the Polish Century Club where the Hall of Fame is, so I was able to see all the pictures and everyone that had been inducted. I thought, ‘Man, that would be really cool to be inducted sometime.’ The next year was when I got my nomination. To be inducted, with everything my family has been through and what it means to them, it’s really, really hard to explain, but I’m totally honored for this achievement.”

A native of Warren, MI, Komisarz-Baugh followed her hero’s footsteps on the gym mats, but her gymnastics career was cut short when she over-rotated a double-back, landing on her heels, fracturing two vertebrae in her lumbar spine.

“We went to a specialist and they did a bone scan and that’s when they found that I had two fractures in the third or fourth lumbar,” she said. “I was in a nasty, hard plastic brace for three months. I had to sleep on the floor and basically was as non-weightbearing as possible to get the fractures to heal properly.”

Komisarz-Baugh had a full recovery, but her specialist gave her news she had not expected.

“He said gymnastics was not going to happen. He didn’t want me diving, he didn’t want me playing football, he didn’t want me running,” she said. “I was like, ‘Okay, you’re telling me all these things I can’t do, what can I do?’ He said basically at this point the only thing we would want you to do would be swimming.”

Komisarz-Baugh hated being in the water. Her family would rent a summer house at the lake and she would spend her time on the boat rather than in the lake. But with no other option, she knew she had to overcome her fear.

“I started out by blowing some bubbles, hanging on to the side of the pool. Eventually I did that and took the water pretty quick after I overcame that fear. I swam my senior year in high school at Warren Mott and won two state championships in the 100-meter and 200-meter free.”

Just one year into her competitive swimming career, Komisarz-Baugh took her talents to the University of Kentucky where she was a three-time SEC Champion, a seven-time NCAA All-American, was named the SEC Swimmer of the Year and won the SEC Commissioner’s Award.

After a successful four years with the Wildcats, her swimming career was just beginning.

“My senior year, I graduated college in 99’ and the Olympic Trials were in 2000. I thought I’ll stick around another year in 2000,” Komisarz-Baugh said. “The US National team was picking five different teams, the Olympic Team, the World Championship team, the World University Games and all that, so I was like I’ll see if I can make a U.S. National team before I retire.”

She swam the trials in 2000 and didn’t make the team, but finaled in all five of her events, which sparked her competitiveness even further.

“I thought, “Wow, I’m still getting better and I’ve only been swimming for six years and everybody else I’m talking to has been swimming for 20 years. If I stick with this what else could I do? Could I continue to move further in the sport and make an US National Team?’”

Her realization came true the following year. Komisarz-Baugh qualified for the World University Games and would represent the US National Team. And represent she did.

“I medaled in all five of my events in the University games and tied for the most ever medals won by a female athlete at the games and things kind of took off from there,” Komisarz-Baugh said. “I signed a contract with Speedo and was finally able to make some money doing a sport that I loved and I think that’s when I really thought let’s take a go at this. Let’s see what we can do and make the Olympic team in 2004 and really focus on training and seeing how far I could take it.”

Her Olympic dream came true in 2004 when she won the 100 Fly in the Olympic Trials, earning a spot on the USA Olympic Team who would compete at the Summer Olympics in Athens, Greece.

“You trained long for so long and everybody thinks you trained for a year or a few years, no you pretty much train for a lifetime for this, she said. “This is 2004, I had been swimming for 10 years at that point. It’s 10 years of training that comes to a head.”

Komisarz-Baugh helped Team USA win a gold in the 4×200-meter freestyle relay and a silver in the 4×100-meter medley relay, the highlight of her swimming career.

“The celebration is insane, it’s incredible. As an Olympian and when you’re there in the moment, I don’t think you understand the magnitude of what’s going on until you can step away from it for a little bit,” she said. “You’re having fun and you’re celebrating and your friends and family are there and everybody’s happy and it’s this utopic feeling and there’s this realization, I just did that. This is kind of crazy. I’ve watched all my heroes on TV doing that and there were millions of people watching on TV me doing that. It’s humbling but really hard to comprehend what it is you’re doing when you’re doing it.”

Komisarz-Baugh has accomplished many feats in the pool, but ranks the induction in the National-Polish American Sports Hall of Fame as one of her greatest achievements.

“It ranks right up there. Obviously winning the gold medal and representing my country is probably the peak, but I’d have to say this comes right underneath that,” she said. “Being able to represent not only the US, but my Polish heritage. Letting all of the athletes out there who have come through Warren or Detroit and knowing that if you persevere you can reach your dreams you can reach your goals. I’m hoping I can show the younger generations that anything is possible that you set your mind to. This award just amplifies that and it really does mean so much to me.”