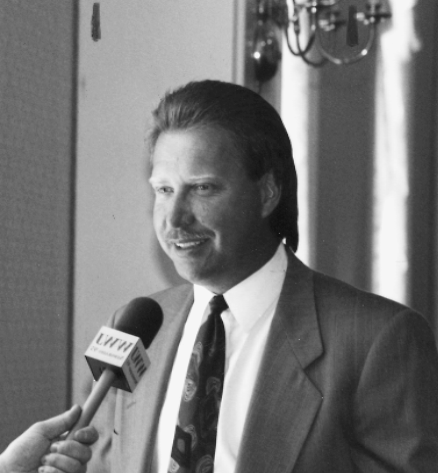 An outstanding high school quarterback in the Buffalo area and at Youngstown State, “The Polish Rifle” carved himself a niche as one of the game’s top quarterbacks in 17 years of pro football, 10 with the Philadelphia Eagles. He completed 2,187 of 4,117 passes for 28,190 yards and 179 touchdowns. In 1980, Jaworski was named NFL Player of the Year for leading Philadelphia to a 12-4 record and the NFC title. He tossed 27 TD passes and had only 12 interceptions in 451 attempts.

Ron Jaworski’s strong and accurate right arm earned him the nickname of “The Polish Rifle.” However, the leading vote-getter in the 1991 Polish-American Sports Hall of Fame balloting is remembered as much for his intelligent leadership, infectious enthusiasm and fiery determination as for his ability to throw the football.

Jaworski was one of three children born to William and Mildred “Molly” (Deren) Jaworski in Lackawanna, New York. Lackawanna is a small city directly south of Buffalo that grew up around the massive Bethlehem Steel plant, which employed thousands of workers before shutting down about 10 years ago. Bill Jaworski, Sr. was one of those workers, but he wanted a better life for his son.

While in high school Ron got a chance to find out what life was like in the steel plant. His father got him a summer job performing the demanding task of straightening out crooked steel rods. One week later, Ron was ready to call it quits, but his father made him stay for two more weeks to make certain that the lesson would not be forgotten.

Ron developed into an outstanding high school quarterback, and received numerous scholarship offers from major universities despite carrying just 160 pounds (he later went up to 196) on his 6’2″-frame. But when the coach at little-known Youngstown State promised that Ron would be able to pass 30 times a game, Jaworski responded: “Where do I sign?”

Jaworski played a major role in turning around the program at Youngstown State and in his senior year ranked fifth in the nation among college division passers.

He was drafted in the second round in 1974 by the Los Angeles Rams, but sat out his first season on the taxi squad. He got a chance to play late in 1975 when Rams starting quarterback James Harris was injured. Ron led the team to victories in the last two games of the year and in the first round of the playoffs. By then Harris had recovered and was named to start in the NFC Championship game against Dallas. Harris was ineffective, but by the time Ron got in the game the Cowboys were well on their way to a 37-7 victory.

The following year Ron had a dispute with Rams management regarding his role with the team, especially after LA acquired Pat Haden, a USC graduate and a local favorite. At the end of the 1976 season Jaworski’s rights were traded to Philadelphia, a team and city where he would feel much more comfortable.

Despite his 4-0 record as a starter, Jaworski did not fit in with the Rams’ Hollywood atmosphere. He was a boyish, enthusiastic player who was known to chase his receivers and hug them after completing long bombs.

“I’m a shot-and-a-beer guy, and that was a martini town,” recalled Ron.

Head coach Dick Vermeil installed Jaworski as Philadelphia’s starting quarterback and the team’s fortunes took an immediate turn for the better. In his second season at the helm, Jaworski led the Eagles to a 9-7 mark, its first winning record in 12 years.

Soon the one-time doormat of the NFL became one of its powerhouses. The dramatic turnaround was not only largely attributable to Jaworski’s powerful arm and quick release, but also to the confidence the vociferous quarterback instilled in his teammates.

In 1980 everything came together for Jaworski and the Eagles. Ron completed 257 of 451 passes for 27 touchdowns and just 12 interceptions. In recognition of his superb season, Ron was named NFL Player of the Year. Philadelphia had a 12-4 record and won the NFC Championship, but lost to the Oakland Raiders in Super Bowl XV.

Although the Eagles never reached that pinnacle again, “Jaws” continued to excel. For example, in 1985 Philadelphia went 7-9, and ranked 23rd in the NFL in rushing. But despite the lack of a running game, the Eagles finished eighth in the league in passing, a real testimonial to the abilities of Ron Jaworski.

Always a tough competitor, Jaworski persevered despite an assortment of injuries over the years, including a broken finger on his throwing hand, broken ribs, and a broken left leg that required the insertion of a steel plate.

By 1987, age and injuries had taken their toll on Jaworski. Although Ron was willing to continue with the team in a back-up role, the Eagles management traded the popular 36-year-old quarterback to Miami. After two seasons with the Dolphins, he signed as a free agent with Kansas City. In 1989 he decided to retire from the game and tend to his business pursuits full-time.

Considered one of the top quarterbacks in NFL history, Jaworski completed 2,187 of 4,117 passes for 28,190 yards and 179 touchdowns during his 17-year career. He ranks 13th on the NFL all-time yards passing list, ahead of Pro Football Hall of Famers Terry Bradshaw and Joe Namath. He is also Philadelphia’s all-time leading passer.

Ron and his family settled in the Philadelphia area, and he used his football fame to help develop a business career. This son of a steel worker’s various interests include ownership of the Eagle’s Nest Golf and Country Club in the Philadelphia suburb of Sewell, N.J. His most visible activity is his work as a football commentator for ESPN.

1980 was a special year for Ron Jaworski and the Philadelphia Eagles. Ron earned NFL Player of the Year Honors, leading the Eagles to the NFC Championship and an appearance in Super Bowl XV.

That season the Eagles posted a 12-4 record and captured its first title in 20 years. Philadelphia defeated the powerful Dallas Cowboys for the NFC Championship, 20-7. “We’re not America’s Team,” Ron told reporters after the game, referring to the Cowboys’ nickname. “We’re the Pope’s team.” The Polish Rifle then displayed the special papal medal from John Paul II that he carried with him.

Unfortunately, in January 1981 Ron and the Eagles lost to the Oakland Raiders in the only Super Bowl appearance ever made by Philadelphia.