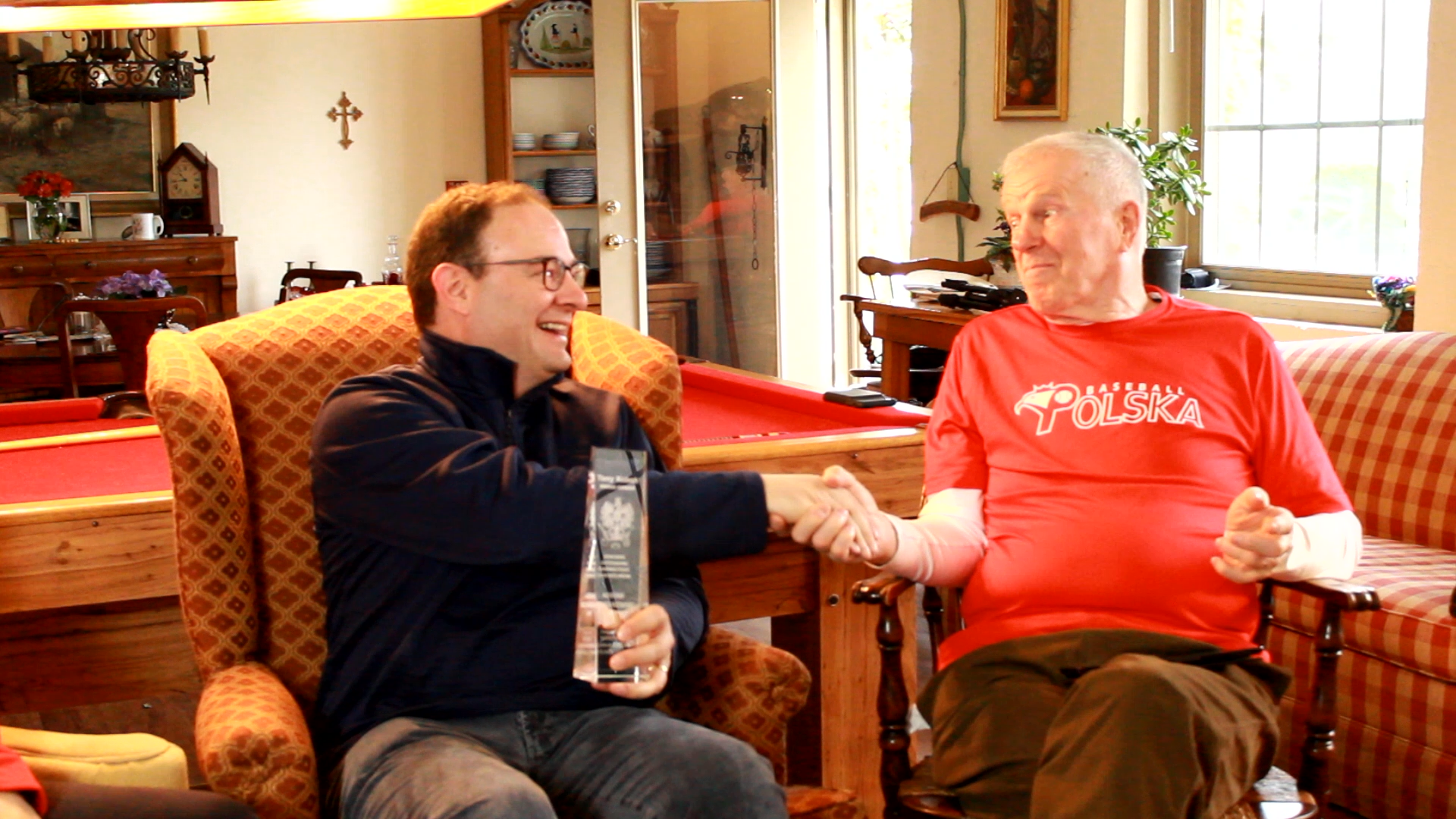 By George Eichorn
NPASHF Board Member

When the National Polish-American Sports Hall of Fame (NPASHF) announced its intention to establish a new media award, it did not take long to decide on its name. The NPASHF Tony Kubek Media Award, nicknamed the “Kubey” will forever honor the men and women of Polish descent who cover the wide world of sports.

Adrian Wojnarowski is the inaugural recipient of the NPASHF’s Tony Kubek Media Award, presented to a Polish-American media member for outstanding contributions to any form of sports media, including but not limited to, print, broadcast, and internet media.  He and Kubek got together in Wisconsin recently to record the presentation as neither was available for our annual Induction Banquet here in Troy, Michigan.

When asked his reaction to being awarded the first “Kubey,” Wojnarowski said “humbled and honored.”

“First of all, the National Polish-American Sports Hall of Fame is full of tremendous achievers and people of great character, so to be recognized by that body with an award is beyond remarkable.

“To be selected as the first recipient is even more of an honor, considering all the incredible Polish-American journalists and broadcasters in our industry. And also, Tony Kubek – what an honor to have an association with a trail blazer like him. He opened doors for great athletes to make the move from the playing field to the broadcast booth, and he set a standard on the broadcast booth for honesty and professionalism. On many levels, this is an extraordinary acknowledgement.”

Kubek also worked games for Canada’s CTV and CSN, and Madison Square Garden Network. Kubek was awarded the Ford C. Frick award in 2009 for broadcast excellence by the National Baseball Hall of Fame and Museum. He was enshrined into the National Polish-American Sports Hall of Fame in 1982.

“My earliest memories as a baseball fan are centered around Tony in the booth with the likes of Joe Garagiola and Bob Costas,” said Wojnarowski. “He (Kubek) is synonymous with the sport – and with excellence. Getting the chance to meet Tony and his family to record the presentation was an absolute thrill.”

Wojnarowski (nicknamed “Woj” by his legion of followers) is proud of his Polish heritage.  He was born in Hartford, Connecticut, grew up in Bristol where he went to Bristol Central HS, and then graduated from St. Bonaventure University.

“I grew up in a Polish-American household, with a dad whose parents both emigrated from Poland as young adults and assimilated into American culture. For us, that meant Sunday Mass at St. Stanislaus Parish, CCD, church festivals in the parking lot and a lot of kielbasa cooking in the kitchen throughout the years.”

His media career has included stops with the HartfordCourant, FresnoBee, TheRecord, Yahoo Sports, and since 2017, with ESPN where he is widely recognized as the top NBA insider and news breaker. Wojnarowski is integral to ESPN’s multimedia coverage of the NBA covering the league, its teams, players, free agency, the NBA Draft, the NBA Summer League and more. His social media following is one of the highest of any U.S. media member. In 2006, Wojnarowski authored the New York Times best-seller, “The Miracle of St. Anthony: A Season with Coach BobHurley and Basketball’s Most Improbable Dynasty (Gotham Books.)

When reminded that the 2019 NPASHF Induction Banquet was being held on the same night as the NBA Draft, Woj was asked if he regretted not being able to receive his award in person.

“Absolutely! The NBA Draft is one of the can’t-miss days in my job, so I am disappointed that I won’t be able to join everyone in Michigan. However, I am grateful that David Jansen of the Hall worked with Tony Kubek to allow me to travel to Appleton, Wisc., and tape an awards presentation and conversation that can be shared at the event.”