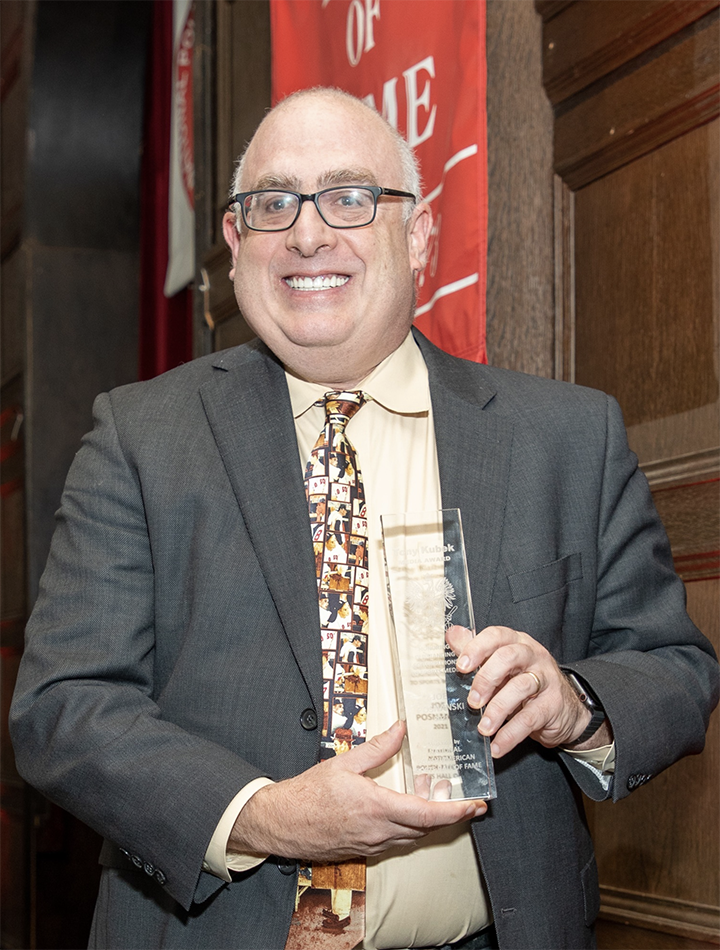 “This award means the world to me!” — Joe Posnanski

By Tom Markowski | NPASHF Board Member

There seemingly isn’t a topic Joe Posnanski hasn’t touched upon in the field of sports journalism. Beginning with his coverage of high school sports at the Charlotte (NC) Observer to his award-winning work with NBC Sports and their coverage of the Olympics, Posnanski’s reporting has encompassed the world of sports.

Born in Cleveland, Posnanski spent much of his youth in Charlotte, eventually graduating from the University of North Carolina-Charlotte.

“I grew up a big sports fan,” he said. “As far as writing, I went to college to study accounting. That didn’t work out. I ended up writing letters to a number of places and one went to the Charlotte Observer. The editor liked what I wrote and called me. Once I was there I knew this was what I wanted to do. Who wouldn’t want to cover sports?”

He began his career as a stringer at the Observer and quickly made his mark as a columnist at the Cincinnati Post and the Augusta Chronicle. In the fall of 1996 the Kansas City Star hired Posnanski as their columnist, a position he held until 2009. He would later work for such renowned national media organizations including Sport Illustrated, NBC Sports and MLB.com. He currently writes for The Athletic, has his own blog (JoeBlogs) and weekly podcast (Poscast).

Posnanski won two Emmy’s for his digital coverage of the Olympics while working for NBC, He’s the recipient of other awards not the least of which was being named the country’s best sports columnist in 2002 and ’05 by the Associated Press Sports Editors.

Now we can add another honor. Posnanski has been named the second recipient of the Tony Kubek Media Award by the National Polish-American Sports Hall of Fame. Adrian Wojnarowski of ESPN was so honored in 2019.

The Kubek Award is presented to a Polish-American media member in any form of sports media.

Though his wall at home in Charlotte is laden with hardware, Posnanski will find a special place among all of those recognitions with this award.

“(Being Polish) is very meaningful to me,” Posnanski said. “(This award) means the world to me. Getting a call from Tony Kubek was amazing. I’m not old enough to remember him as a player but I do remember him doing the broadcasts. To win this, to follow Adrian, is just amazing.

“I love the organization (NPASHF) with all of the incredible athletes they have in the hall. It’s the coolest.”

What’s really ‘cool’ is Posnanski’s reverence to his ethnicity. Both of his parents were born in the Soviet Union before moving to Poland, then to America over 60 years ago. Polish candy had a special place in the Posnanski household.

“Even when we moved to Charlotte, my dad found the local deli where he could buy Polish candy,” Posnanski said.

Not to be lost on all of this sweet talk, is the work ethic passed on to Posnanski by his elders. In addition to his busy schedule with The Athletic, Posnanski has written six books including ‘Paterno”, the biography of legendary, and somewhat controversial, career of former Penn State Coach Joe Paterno. That book reached No. 1 on the New York Times list.

Another book, ‘The Soul of Baseball: A Road Trip Through Buck O’Neil’s America’, won the Casey Award as the best baseball book of 2007.

His other books include ‘The Secret of Golf’, which describes the relationship, and rivalry, between Jack Nicklaus and Tom Watson. Another, which reached No. 17 on the New York Times Bestseller list, is ‘The Machine: A Hot Team, a Legendary Season, and a Heart-stopping World Series: the story of the 1975 Cincinnati Reds.

His seventh book, ‘Baseball 100’, is Posnanski’s take on the top 100 players of all time and will be released Sept. 28, less than two weeks from now.