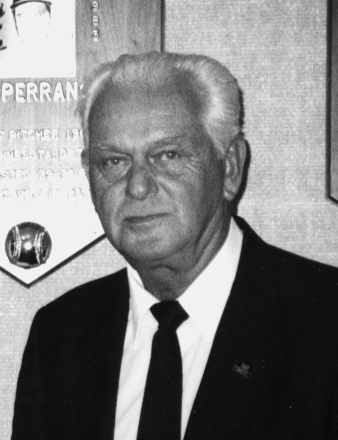 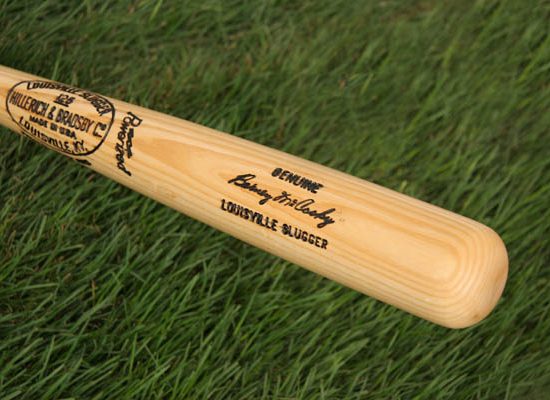 From day one of his 11-year pro career, Barney McCosky was an impact player. He batted a sizzling .447 in his first nine pro games, and ended his rookie season (1939) with a .311 average, 190 hits, 120 runs and a .986 fielding average, sparking intense debate over who deserved Rookie of the Year honors: the rangy McCosky or Boston’s Ted “Splendid Splinter” Williams. McCosky defied the sophomore jinx in 1940 to have a career season: a .340 average with 200 hits, including 39 doubles and 19 triples. After three years in the service with the Navy, he rejoined the Tigers, but was traded to Philadelphia for George Kell. Ironically, it was in Detroit that McCosky suffered a back injury that was the start of the end of his career.The A’s came in to play the first night game at Tiger (then Briggs) Stadium on June 15, 1948. McCosky crashed into the wall chasing a hit by Dick Wakefield. McCosky amassed a .312 average in his career with Detroit, Philadelphia A’s, Cincinnati and Cleveland. McCosky died in 1996.

His bat, speed and hustle caught fans’ fancy from the start

From day one of his 11-season major league career, Barney McCosky was an impact player.

He had Tigers fans rubbing their eyes in disbelief when he stepped into the batter’s box on Opening Day 1939 against the Chicago White Sox.

“He took a deliberate stance on the left-hander’s side of the plate, feet not too wide apart, and exactly parallel,” recalls writer Franklin M. Reck. “He held his arms well away from his body, bat drawn back and ready.”

When a pitch came in to his liking, McCosky took a short stride into the ball and swung. “There was something rhythmic and familiar about it all,” Reck wrote, so much so that fans checked their scorecards.

“Who is this fellow?” they wondered. “Charley Gehringer?”

McCosky smacked a pair of singles, one of them igniting a two-run rally, in his major league debut. In his first nine games, he went 17-for-38 for a sizzling .447 average.

His hustling base running and ball-hawking style of outfield play had fans comparing him to Tris Speaker.
And at the end of the season-with a .311 average, a team-leading 190 hits and 120 runs, and a league-leading .986 fielding average he was the subject of intense debate about who deserved Rookie of the Year honors: the rangy 6-foot-1, 180-pound McCosky or Boston’s “Splendid Splinter,” Ted Williams.
McCosky defied the curse of the sophomore jinx by compiling better stats in the Tigers’ 1940 pennant-winning season, tying slugger Hank Greenberg with a team-high .340 average and leading the American League in hits (200) and triples (19). The Tigers lost the World Series to Cincinnati in seven games, but McCosky, who played every game, hit .307.

The native of Coal Run, Pennsylvania, hit .324 in 1941 and .293 the following summer, the only time in his first seven big league years that McCosky was under .300.

He was in the prime time of his baseball life, and only 25 years old. However, like a lot of professional stars of his day, McCosky put his job on hold to serve in the U.S. Navy in World War II for the summers of ’43, ’44 and ’45.

McCosky rejoined the Tigers in 1946, but after hitting only .198 in 25 games, he was traded to Connie Mack’s Philadelphia Athletics for a promising 24-year-old third baseman named George Kell.

McCosky regained his stroke with the A’s hitting .354 in 92 games for the remainder of that season, .328 in 1947 and .326 in 1948 despite playing half the season with an ailing back injury that he incurred, ironically, in the same stadium where he started his career nine years earlier.

It was June 15, 1948, and Philadelphia was in Detroit to play the first night game in Tiger (then Briggs) Stadium. Nearly 55,000 fans witnessed a 4-1 Detroit victory and, though they didn’t realize the significance at the time, the beginning of the end of Barney McCosky’s baseball career.

In the bottom of the eighth inning, McCosky “impacted” into the left field wall chasing down Dick Wakefield’s home run ball. He was taken off the field, unconscious, on a stretcher.

His wife Jane was sitting on the first base side. “Our whole family was there and I was pregnant at the time. It scared me half to death,” she remembers. “When I got to the locker room, a Catholic priest was leaving. I didn’t know what to think. But he told me Barney would be all right.”

Afterward, McCosky told reporters: “I hit my head on a pipe when I went down and was knocked out completely. I don’t remember them carrying me off the field.”

As for his injured back, “It’ll probably keep me out of the lineup for a day or two,” he said. McCosky went on to finish out the season, but, in fact, the injury kept him out of the entire 1949 season. Three vertebrae in McCosky’s lower back had to be fused, and he took a voluntary retirement to heal.

McCosky was never the same ballplayer when he returned to active status in 1950. Whereas he averaged .320 in his first seven major league seasons, he averaged only .241 in his last four campaigns with Philadelphia, Cincinnati and Cleveland. He retired after 1953 season with the Indians, getting to the plate only 21 times, all in a pinch-hitting role.

Barney McCosky’s Polish connection is by way of his mother, a native of Poland whose name was Magdalena Rutkowski. She died when McCosky was just a year old. He was the youngest of nine children.

Born April 11, 1918, in Coal Run, Pennsylvania, McCosky moved with his family to Detroit when he was six years old. It was then that his father, a Lithuanian, changed the family name to McCosky. Barney says he’s forgotten the Lithuanian name under which he was born, but that it sounded like McCosky when pronounced in English.

McCosky married Jane Malicki on June 19, 1946, a month to the day after he was traded by the Tigers to Philadelphia. Jane’s parents owned Joey’s Stables in Detroit’s Delray section.

THANK GOODNESS BARNEY SAW WHAT HE WASN’T SUPPOSED TO SEE

Ah, but for a slip of paper left lying on a hotel room table, we might not be honoring the baseball exploits of Barney McCosky.

Adopting the style of Charley Gehringer, McCosky, who graduated from Detroit Southwestern High School in 1935 where be batted .727 in his senior year, and was equally impressive playing American Legion sandlot ball, signed a minor league contract in 1936.

Assigned to Charleston in the Mid-Atlantic League, the 18-year-old McCosky led all hitters with a .400 average. Promoted to Beaumont in the Texas League, McCosky hit .318 in 1937 and led the league in runs, hits and triples, and followed up with a .302 average in 1938.

The stage was set for McCosky to make it to the majors, and so he was invited to the Detroit Tigers’ spring training camp in Lakeland in 1939.

Let’s have Hall of Famer and Tigers announcer Ernie Harwell tell the rest of the story, excerpted from one of his radio broadcasts in 1940: “It’s March 1939 in Lakeland…The outlook for the Tigers isn’t any too bright. But there is one rosy spot, the outfield. In fact (manager) Del Baker has six outfielders. And that worries him. There are Pete Fox, Dixie Walker, Chet Laabs, Roy Cullenbine, Frank Secory and a youngster named Barney McCosky.

“The Tigers are soon to leave for the north…Baker feels that one of his left-handed hitters has to be dropped, and that means either McCosky or Secory. He finally decides that Secory…will be retained. And besides, McCosky hasn’t even been able to BUY a hit in an exhibition game. “And then Del Baker makes up a list…of the names of seven rookies who’re to be optioned to the minors…and deep down on that list is the name of Barney McCosky.

“Well, Barney sees that list on a table in Baker’s hotel room, sees it when he’s not suppose to. At first, he’s stunned, ‘They can’t do this to me.’ And then he thinks: ‘They are right. That’s where I belong, but they can’t do it. I won’t let them.’

“The Tigers played Brooklyn in an exhibition that afternoon and Baker decided to have one more look at McCosky. Barney ate the chance up. He hit everything the Dodgers threw up there. He drove in five runs and ran wild on the bases.

“Then, Baker changed his mind. He erased the name of McCosky off that all-important list and substituted that of Secory.

“From then on McCosky was a changed player. His tenseness left him. His fielding improved and he batted close to .500 for the rest of the exhibition trip.” And the rest is history.

“But if it hadn’t been for that one slip of paper,” Harwell concluded, “we’d never be talking like this and the Tigers wouldn’t be making reservations for tickets to the (1940) World Series.”

And we wouldn’t be honoring Barney McCosky as a 1995 inductee into the National Polish-American Sports Hall of Fame.