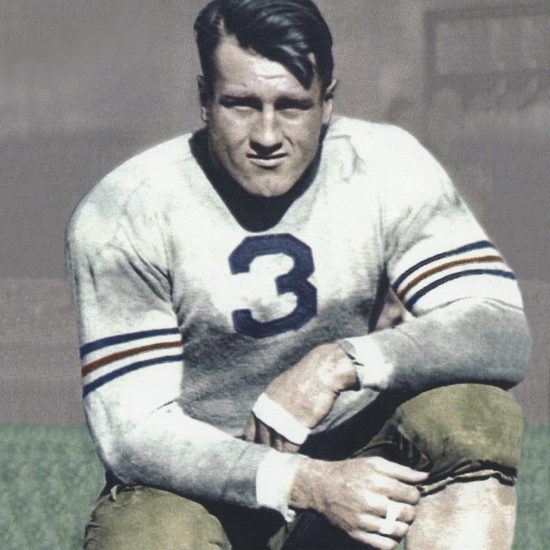 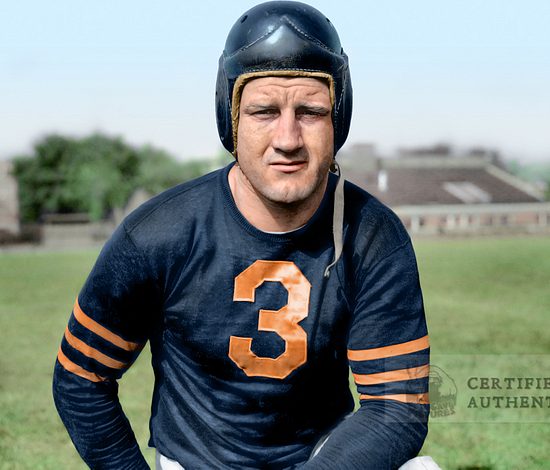 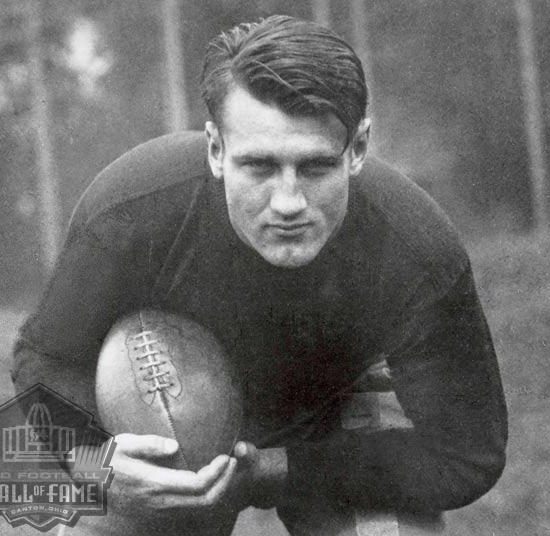 Bronco Nagurski was a standout football player at 6’ 2” and 226 pounds at the University of Minnesota from 1927-1929.  Nagurski played defensive tackle in 1927, and both fullback and tackle in 1928 and 1929.  In 1929 he was named All-America at both positions, the only person to this day ever to be named All-America at two positions in the same season.  After his legendary career at Minnesota, he signed with the Chicago Bears, playing nine seasons at running back and linebacker (1930-1937, and 1943).   Nagurski led the Bears to three NFL championships (1932, 1933 and 1943), and was named all-NFL five times.  In 1951, Nagurski was elected to the inaugural class of the College Football Hall of Fame, and in 1963, he was elected into the inaugural class of the Pro Football Hall of Fame.

Even if you don’t know much about him, you’ve probably heard of Bronko Nagurski. Even though he retired from the Chicago Bears in 1943, his legend endures. The son of immigrants of Polish and Ukrainian ancestry, he was a humble man who epitomized toughness and strength, and his mythic career helped popularize pro football during “The Golden Age of Sport.”

The Pro Football Hall of Fame put it this way:  “Chicago Bears fullback Bronko Nagurski was the symbol of power football during the 1930s. His performances took on legendary proportions. Many eyewitness observers insisted that for sheer brutal line-smashing, no one came close to Nagurski.”

Bronko’s parents were Nicholas and Michelina Nagurski, and they came from an area known as Galicia that is now part of Ukraine, though it was then under the control of Austria-Hungary, It was land that had been part of Poland, and had a large Polish population.

Nicholas’ father was Gregory Nagurski, and the maiden name of Nicholas’ mother was Blanski.  Michelina’s maiden name was also Nagurski (she and Nicholas were fourth cousins) and her mother was Sabina Radeczka.

Nicholas (he was usually called Mike) and Michelina immigrated to Canada. Bronko was born on November 3, 1908 in Rainy River, Ontario, the oldest of four children. When he was five, his family moved to International Falls, Minnesota.

Working on his parents’ farm and doing a variety of physical labor, Bronko developed into a strong 6-footer. “He delivered groceries for his father with a wagon,” recalled his son Tony. “He hauled gravel with a team of horses for his father when he was building houses.  His dad had a farm and a sawmill, so he was always helping out there.”

The coach at the University of Minnesota saw him while scouting another player in International falls, and signed Bronko to play for the Golden Gophers.  At Minnesota Nagurski played four positions and was named All-America at both fullback and tackle, the only man to receive that honor at two positions. During his three years he led his team to a 18-4-2 record and the 1927 Big Ten championship. Probably his greatest game came against Wisconsin in 1928.  Wearing a back brace to protect cracked vertebrae, he recovered a Badger fumble deep in their territory and then ran the ball six straight times to score the go-ahead touchdown. Later, he intercepted a pass to seal the victory.

After college Bronko joined the Chicago Bears and quickly became a dominant force in pro football. He was a powerful 6-2, 235-lb. athlete who ran through, rather than around opponents. “I always used my strength in football. I liked to meet guys head-on when I was carrying the ball,” he once said. “Then I’d drop my shoulder, and catch him with that, and then brush him off with my arm. It worked — most of the time.” He was fast, too — the only Bears player who could outrun him was “The Galloping Ghost,” Red Grange.

While he was known for his rushing ability, Bronko was an outstanding all-around player, a devastating blocker on offense and a bone-crushing tackler on defense.In 1933, in the National Football League’s first official championship game, Bronko passed for two touchdowns, including the game-winning score. Bronko was named a first- or second-team All-NFL in seven of his first eight seasons

His coach, the legendary George Halas, considered Bronko the greatest player he had ever seen. Even the great Jim Thorpe, who refereed one of Nagurski’s games, was impressed. “The man simply isn’t human…how any man can knock down and spin so many opposing giants on their ears is a mystery to me.”

Both the Polish and Ukrainian communities claimed Bronko as one of their own. At a time when they faced much prejudice and discrimination, he instilled a sense of ethnic pride. Not only was he an extraordinary athlete, but he exemplified the ideals that they upheld with his humility, hard work, and love of family.

Bronko started wrestling when he wasn’t playing football. He didn’t like the showmanship aspect of wrestling, but it paid better than football. When Nagurski couldn’t get the Bears to give him a raise to $6,500 in 1938, he retired to become a full-time professional wrestler. A major box office attraction, he won numerous titles and kept wrestling until 1960.

But in 1943, when World War II caused a manpower shortage, he rejoined the Bears at the age of 35 despite being out of the sport for six years. Late in the season, with Chicago trailing in a must-win game, Nagurski’s line plunges keyed a drive to the tying touchdown and then set up the winning score. A week later, in the 1943 NFL title game against Washington, he scored the touchdown that put the Bears ahead to stay, sealing his legendary status.  He then retired from football again, but continued to wrestle until he was 52.

Back in 1936 Bronko married Eileen Kane, his childhood sweetheart who was of Irish and Dutch ancestry. They had four sons, Bronko Jr., Tony, Ronald and Kevin, and two daughters, Eugenia and Janice.  Bronko encouraged his children to play sports but didn’t push them. “He gave us the opportunity because he put up a basketball hoop, we had baseball gloves, and a football and helmet, but he let us choose and didn’t push us to play any particular sport,” recalled Tony. Bronko Jr.  played at Notre Dame and then was an All Star in the Canadian Football League.  They all graduated from college.

After his retirement Bronko returned to International Falls, where he opened a gas station and led a quiet life, spending time with his family and enjoying the outdoors. Except for rare occasions, he stayed out of the public spotlight. One of the exceptions came in 1963, when he was one of the charter members of the Pro Football Hall of Fame. He was also an inaugural member of the College Football Hall of Fame. But Bronko didn’t spend much time looking backward. “He didn’t talk about his accomplishments and I learned a lot more about him after he died,” said Tony.

As befits a legend, there were many stories about Nagurski. One was that, when someone bought gas from Bronko, they always had to return. That’s because, the tale goes, once Nagurski screwed on the gas cap, only Nagurski could screw it off.

In his later years, he suffered from arthritis and other ailments. Bronko died of heart failure at 81 on January 7, 1990, and was buried next to his wife, who had died in 1989.

Bronko Nagurski was a legend in his time, and all these years later is still remembered as one the greatest to ever play football.