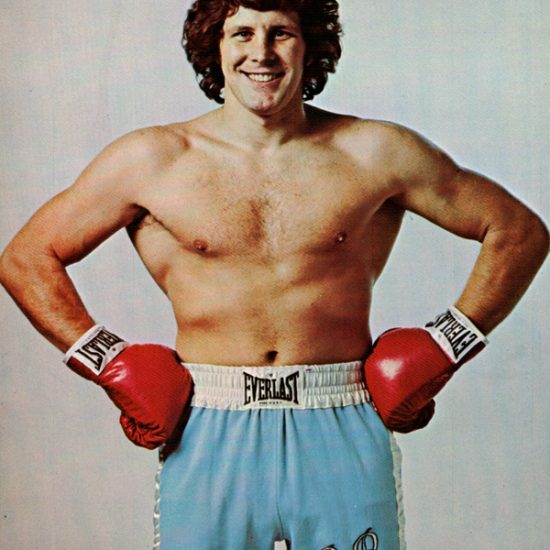 Inducted June 23, 2014
Duane Bobick started boxing at age 16 in Golden Gloves, and became one of the best amateur boxers in the United States. He was a three-time All-Navy champion and two-time All-Service champion. Standing 6’3” and weighing 215 pounds, he won the United States AAU Heavyweight Championship in 1971 and also won the gold medal at the 1971 Pan American Games. As an amateur, he compiled a record of 93-16 with 61 KO’s, beating Larry Holmes to be named to the ’72 US Olympic team for the summer games in Munich. After turning pro, Bobick won his first 19 fights by knockout, gaining a top-10 ranking. He was 38-0 before he lost his first fight, a heavyweight title elimination bout in 1977. He retired in 1979 at age 28 with a professional record of 48-4 with 41 KO’s.

Following His Dream and Living It

Duane Bobick of Minnesota was a 1968 Royalton High School graduate. He was an outstanding athlete, excelling in baseball, basketball and football. “Up to three years ago, he held the record for the highest batting average in high school,” Duane’s wife Debi recently told me. He also earned All-Conference high school honors.
But it was boxing where Bobick made his niche in sports history – a sport he didn’t take up until after he enlisted into the Navy.

Boxing became Bobick’s new sport and he excelled in it. As an amateur, he won the All-Navy Title, the Inter-Service Crown, the National AAU Title, National Golden Gloves Title, World Military Heavyweight Title, the North American Championship and the Pan-American Gold Medal. But Duane set his sights on greater things.
“He had this dream in high school to be in the Olympics,” Debi tells us. And in 1972 Duane realized that life-long dream.

In 1971 Bobick unanimously defeated the great Cuban Teófilo Stevenson at the Pan American Games to bring the US a Gold Medal. Following that victory Bobick battered future professional world champion Larry Holmes over three rounds until Holmes was disqualified for excessive holding. Duane had captured a berth on the 1972 US Olympic Boxing Team, thereby fulfilling his dream!

In the Olympics Bobick made it past the preliminary round defeating Yury Nesterov of the Soviet Union. In the second round he was matched against the Olympic favorite, Teófilo Stevenson of Cuba. This time around Bobick was stopped in the third round. Following the stoppage, Bobick noted, “Stevenson was in a lot better condition. He was a better fighter. Last time I faced him, all he had was a jab.”

There was some hesitation in Debi’s voice as we spoke about the 1972 Olympics in Munich. Recalling the events as I remembered them, I brought up the Munich Massacre.

She opened up saying:

“It was the Summer Olympics of ‘72; Duane was celebrating his 22nd birthday while he was there. He went there wanting to win the Gold. This is what he told me about what happened there: He got there and he witnessed people being killed outside his window. He didn’t know what was going on. The officials came in telling the Americans that the games were off – then they were on – then off – then on again. This and the killings made him lose focus… and it didn’t really matter anymore on being there with everything happening around him because what really mattered to him were the terrorist attack and the people getting killed and injured. The Russian and Cuban athletes were sheltered and knew nothing of what was going on. They were told nothing and saw nothing.”

“Duane has always been an emotional type of person and he cares a lot about other people,” Debi continued, “and because of that, I truly believe he lost his focus.”
This was the end of Bobick’s amateur boxing career, where he compiled an outstanding ring record of 93 wins with only 10 losses… with 60 of those wins coming by knockout.

Following his amateur career, Bobick entered into the professional ranks in 1973. He was managed and trained by heavyweight great Joe Frazier. He was to have faced Muhammad Ali in 1976 but the fight never came off. In 1977 with a record of 38-0 and 31 KO’s, he suffered his first defeat against Ken Norton. Norton, one of the division’s heaviest hitters, caught Bobick with a blow to the throat in the opening seconds of the first round. Debi recalls Duane’s assessment of his first professional loss:

Duane stood his ground and was stopped in the first round. As a boxing fan in the 70’s this is the tenacious Duane Bobick I remembered. As we say in boxing, “it isn’t the size of the dog in the fight but the size of the fight in the dog,” and that best describes Bobick.

Bobick returned to the ring just a little more than two months later to defeat Scott LeDoux for the Minnesota heavyweight title. Over 9,000 people attended the fight to see Bobick knock LeDoux down twice, stopping him in the 8th round. Bobick retired as a pro in 1979 compiling an impressive ring record of 48 wins with only 4 losses, with 42 wins by knockouts… an accomplishment in an era when the heavyweights ruled the sport!

Following his retirement from boxing Bobick returned to his home roots of Minnesota and found work in a paper mill. In 1997 he suffered an industrial accident. Both arms were pulled into a machine used to split rolls of paper. The bones in both arms were crushed and the skin, muscles and tendons ripped from the bone. But Bobick, the true fighter he has always been, “Never quit and he never complained… ever.” relayed Debi.

Before and especially after the accident, Bobick was a volunteer in helping people. He received the Governor’s Volunteer Award, Acts of Kindness Award for school, hospital and church work. In 2006 he was elected to city council.

But the accident had a devastating toll on Bobick. He was suffering from CTE (Chronic Traumatic Encephalopathy) a degenerative disease of the brain, and the trauma and pain from his accident was said to have accelerated his condition. Because of this condition Duane was unable to join us in person for his induction. Unfortunately, the news recently became sadder as Duane was placed into specialty care because he could no longer be attended to at home.

This of course is very hard on his wife Debi but she allowed me to share these thoughts:

“Say as much as you want about his condition because you are the first person who has ever wanted to do this. In the boxing world they love the sport; they want the sport to go on; and they don’t like to admit to the fact that a lot of the boxers in Duane’s era, and even now, experience these conditions. Duane has lost 6 of his boxing friends and they basically all had the same thing. I don’t have a problem with you writing it, Duane doesn’t have a problem with it.”

Debi asked me to close with the following:

“Duane was friends with everybody. Regardless of the fighter or type of fight, he would say that ‘in the ring he was my foe but outside the ropes we were friends.’ To Duane, it was the whole joy of traveling and meeting people. He loved the sport. He loved the training and the discipline. If he were there in person he would tell you to enjoy life, and to treat everybody with kindness because that’s what he did… and to follow your dreams like he did!”