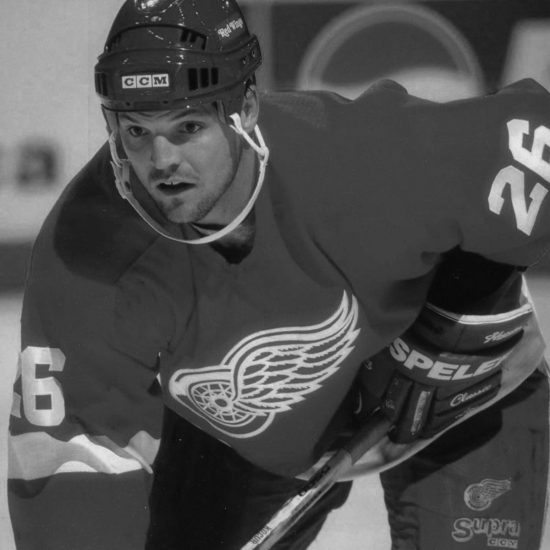 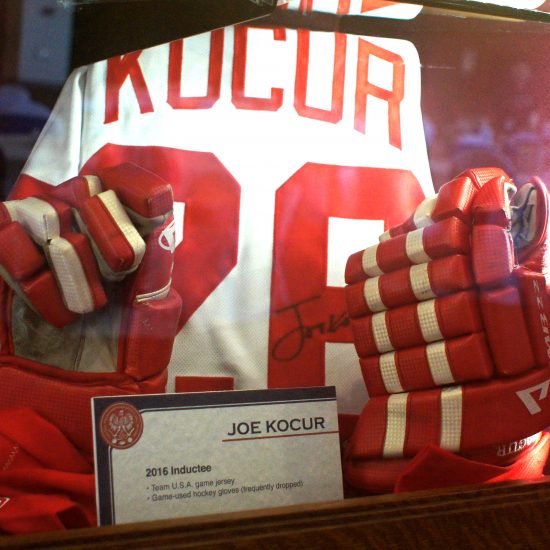 Inducted June 23, 2016
Joe Kocur was a six foot, 220 pound right winger drafted in 1983 by the Detroit Red Wings as the 88th overall pick. He played 15 seasons in the National Hockey League with the Red Wings, New York Rangers and Vancouver Canucks. Kocur was a three-time Stanley Cup Champion, first with the Rangers in 1994, and in 1997 and 1998 during his second stint with the Red Wings.

Not many players were as intimidating during their National Hockey League career as Joe Kocur. In a career spanning 15 years with the Detroit Red Wings, New York Rangers and (briefly) the Vancouver Canucks, arguably Kocur was the fiercest.

It was his right fist. Kocur threw it in an incredibly swift and repetitive manner.
Kocur won most of his fights, an inordinate number of them by knockout. Even the NHL’s toughest fighters were fearful of Kocur. His punches were so punishing they often caused genuine injury.

“One thing you hear a lot from the players in the National Hockey League when Joe Kocur played is that he didn’t just hit you, he hurt you,” said Ken Kal, the longtime radio play-by-play voice of the Red Wings.

The classic example was in 1988. A Kocur overhand right resulted in Winnipeg Jets’ defenseman Jim Kyte, who was much taller than Kocur (6-foot-5 compared to 6-foot) being knocked unconscious. Those in attendance that night at Joe Louis Arena feared Kyte might have been killed, and breathed a collective sigh of relief when they found out he was OK.

There are a number of Kocur’s fights on YouTube. Yet, the much fewer goals displayed are a testament to Kocur’s hockey skill, particularly his tally during Game 1 of Stanley Cup finals in 1997.

Kocur picked off a pass deep in the Philadelphia end, sent Flyers’ goalie Ron Hextall one way with a move, and lifted a back-handed shot in the other direction. The water bottle sitting on top of the net flew up. It was remindful of Igor Larionov’s goal in Game 3 of the 2002 Stanley Cup finals vs. Carolina – a real beauty off the backhand.

A 1-1 deadlock early during the first period became a 2-1 Detroit lead. The Red Wings never looked back, capturing their first Stanley Cup championship in more than four decades with a four-game sweep.

“Nothing could beat that,” Kocur said. “Hextall was going one way and I was going another. I probably could have just slid the puck in the net, but I’m glad it worked out the way it did.”

Kocur, who resides in Metro Detroit, is proud to be inducted into the National Polish-American Sports Hall of Fame. His grandparents immigrated to his native Saskatchewan from Poland. His grandmother, Helen, has been a particularly strong influence in his life.

“I think what I received most from my Polish upbringing is a work ethic,” Kocur said. “I learned that at an early age from those around me. I’m proud of being Polish.”

Kocur gives back with an annual celebrity softball game. It benefits the Joe Kocur Foundation for Children, a non-profit, which helps families in need and provides funds for a several charities. This year’s game will be Aug. 27 in Highland Township, MI
.
Kocur participated in 820 regular season and 118 playoff games during his NHL career, which started with Detroit in 1984, and ended in 1999, also with the Red Wings. Kocur was with the Rangers for six years, including playing a prominent role for the 1994 Stanley Cup champs. He is 20th all-time in penalty minutes with more than 2,500. He scored 80 goals and had 82 assists in the regular season, and 10 goals and 12 assists, in the playoffs.

Kocur learned his enforcer role in junior hockey. A coach advised him to find a way to stand out. Fighting seemed to be the best way.

He lost his first fight in major junior hockey.

“But I adjusted to it after awhile,” Kocur said. “I think the one thing that separated me from some others is getting hit didn’t bother me much. I didn’t want to get hit, but if I did, I was usually able to keep going and still get my shots in.”

He was one-half of the “Bruise Brothers” for the Red Wings with the late Bob Probert, another feared NHL tough guy. They were in charge of the protecting the Red Wings’ growing roster of stars, especially The Captain, Steve Yzerman.

Kal recalls a conversation he had with Kelly Chase, a noted fighter, mostly with the St. Louis Blues, during roughly the same span as Kocur’s career.

“He said the punishment when you picked on Steve Yzerman wasn’t the time in the penalty box, but when you’d have to fight Kocur and Probert,” Kal said. “They intimidated the other team and created a lot of room on the ice for their teammates.”

Probert was just 45 when he died in 2010. Kocur treasures the times they played together.

“We shared a place to live and drove to the rink every day together,” Kocur said. “We did pretty much everything together. He was my best friend and I miss him very much.”

Kocur took on Probert twice as an opponent in fights. They became instant hockey classics.
Kocur caught Probert with several good shots, but none of it was personal.

“When we were on different teams like that, we knew we’d have to fight each other,” Kocur said. “We didn’t have any problem with it. It was our job, and besides, aren’t brothers known to get into a fight now and then?”

Kocur is thankful for his time spent with the Rangers. Among his teammates was the great Mark Messier. It remains the Rangers’ only Stanley Cup title since the beginning of World War II. Kocur played in 20 playoff games during the run.

But he admits it was even more special to hoist the Stanley Cup twice with the Red Wings in 1997 and 1998, along with so many of the players he broke into professional hockey with during the 1980s.

Yzerman had requested the Red Wings bring back Kocur – and it wasn’t in a fighting role. He was part of the “Grind Line” with Kirk Maltby and Kris Draper. Kocur spent much less time in the penalty box after his return to the Red Wings.

“The first thing (Red Wings’ Hockey Hall of Fame coach) Scotty Bowman told me is that he didn’t want me to fight unless it was absolutely necessary,” Kocur said. “He didn’t want us in the box. I appreciated the trust he had in me. I remember being on the ice with a minute left protecting the lead in a Stanley Cup-clinching game, and how I didn’t want to let him down for the trust he put in us on The Grind Line.”

When he played, Kocur’s right hand often looked like it had been through a meat grinder. It was cut, bruised, bleeding and battered. He hit so hard, some even suggested he had a plate in it.
Kocur said there a lot more rumors than reality about his famous right hand.

“It was cut and bruised a lot when I played, but you’d be surprised how good it looks these days,” Kocur said. “I have a little arthritis there, but not much, and you’d never know it looking at it. It looks like, well, just a hand.”

Kocur still laces on the skates with the Red Wings’ alumni team. He is the organization’s president.

His legend as one of the Bruise Brothers has only grown since retiring from hockey. He remains a popular fixture in the State of Michigan.

“This home for me,” Kocur said. “I’m proud of what we were able to accomplish.”