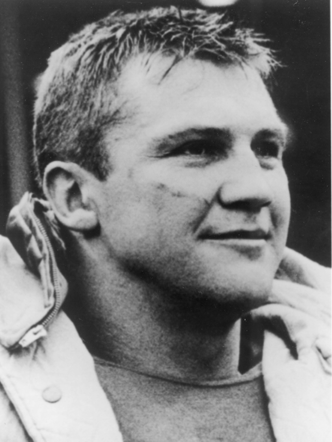 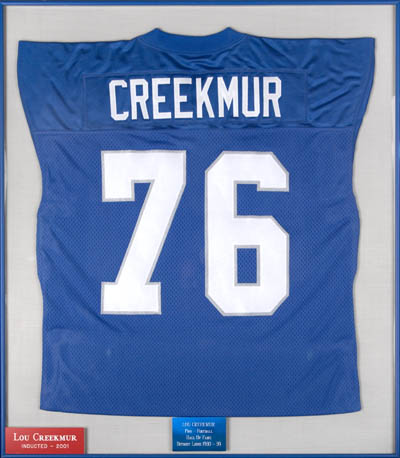 Lou played his entire l0-year professional football career (1950-59) as an offensive tackle for the Detroit Lions. During that period the 6-foot-4, 250-pounder never missed a game, playing in the 126 consecutive NFL contests. Creekmur was selected six times to the All-Pro team and played in eight Pro Bowl games. Helped the Lions win three World Championships (’52, 53 and 57). Lou played collegiate football at William and Mary. He was elected into the Pro Football Hall of Fame in 1996.

It was a casual comment by Frank Tripucka at a golf tournament in Florida that led him to the Polish Hall of Fame. Creekmur remembers, “During our conversation, Tripucka (a fellow New Jersey native) asked me how come I was not in the Polish Hall. My retort was I guess no one realized that I was the son of Rose Kaminski who married James Creekmur way back when and had this little guy named Lou. My grandmother Kaminski and I conversed all the time, she in Polish and I in English. It was my Polish mother that gave me my large body”, Creekmur added.

Remembering his days in the Detroit area, Creekmur said, “I spent a lot of time in Detroit while playing for the Lions including many visits to Hamtramck. I sold Pontiacs for Bob Oliver on Orchard Lake Road in Pontiac and I know exactly where St. Mary’s is located. I was also a Pontiac Elk,” he added.

A native of Woodbridge, N.J., Creekmur was All-County and All-State during his high school career and was widely recruited. He decided on William and Mary College located in Williamsburg, Virginia. Not exactly a powerhouse today, William and Mary, in the ’40s, dominated the Southern Conference. In 1947, William and Mary post a 9-1 record but lost to Alabama, 21-19, in the Dixie Bowl. In 1949, Creekmur played in the first Senior Bowl and also the 1950 College All-Star game in Chicago. He also lettered in track as a shot putter at William and Mary.

Creekmur attributes his selection by the Detroit Lions to his play in the Senior Bowl game in Jacksonville, Florida. Detroit Lion coach Bo McMillin was coaching the north team and Creekmur was playing for the south. “I got into the game on the defensive unit and had a good day including blocking a punt by future teammate Doak Walker,” he said. After the game, McMillin asked Creekmur if he would like to play for the Lions if they drafted him. Creekmur didn’t say no. The Lions drafted him in the second round.

McMillin would be replaced by Buddy Parker (his assistant) in 1951, and the Lions and Creekmur would begin their domination of the NFL in the ’50s. Under Parker, the Lions would improve McMillin’s 6-6 record to 7-4-1 in 1951, 9-3 and the World Championship in 1952 and 10-2 in 1953 and another world title. The Lions would go 9-2-1 the next year and lose to the Browns in the Championship game.

The year 1955 was a rebuilding season at 3-9. Parker shocked everyone by resigning as head coach just before the start of the 1956 season. His assistant, George Wilson, took over and guided the team to 9-3. The 1957 season saw an 8-4 record and a 31-27 playoff win over the San Francisco 49ers at Kezar Stadium in San Francisco. That game is included in Creekmur’s “most memorable” events. “We were down 21 points and came back to beat the 49ers on their home field. We destroyed the Browns, 59-14, in the championship game.” Another “memorable play” occurred in the ’53 championship game with the Browns. With Cleveland threatening on their 10 with the Lions leading 14-7, Creekmur threw Brown quarterback, Otto Graham, for a 15-yard loss, ending the threat. In college, another “memorable” was a 70-yard interception return for the only touchdown of his football career.

Lion observers of the 1950s, remember that Creekmur was known as an absolute artist in the slick track of holding an opponent. He could lock a rival’s arms under his own, twist and twirl him around and dump him so quickly that the poor guy never knew what happened. Also known as the “Smiling Assassin”, Creekmur knew how to use his elbows. He remembers both Ed Sprinkle of the Bears and Leo Nomellini of the 49ers as other particularly adept elbow throwers.

The most Creekmur ever made in football was $1,000 a game. “In 1951 I was making $15,000 as terminal manager at the Saginaw Transfer Company. I did not report to camp that year and figured my Lion career was over.” But he and his boss were at a downtown luncheon with some Lions and the coaching staff. Coach Wilson came over to the table and said, “Hey, Lou, we could sure use you out there.” Creekmur paid little attention but after he and his boss got back to work, Wilson called and was more insistent. Wilson said he wanted Lou to rejoin the Lions and Creekmur said it was up to his boss, who responded, “Hell yes, go back and play.” He signed a contract on Wednesday, practiced and scrimmaged on Thursday, had a light workout on Friday and flew to Los Angeles on Saturday. Sunday he started against the Rams and played the entire game.

Creekmur was always a favorite with the media. He has said that he never met a sports reporter or radio/television announcer that he didn’t like, particularly if he sensed his interview might create some attention not only for himself, but also for his offensive line teammates.

Creekmur lives in Plantation, Florida with his wife, Caroline, and is “semi-retired’ from the trucking business. Most of his free time is spent on the golf course.