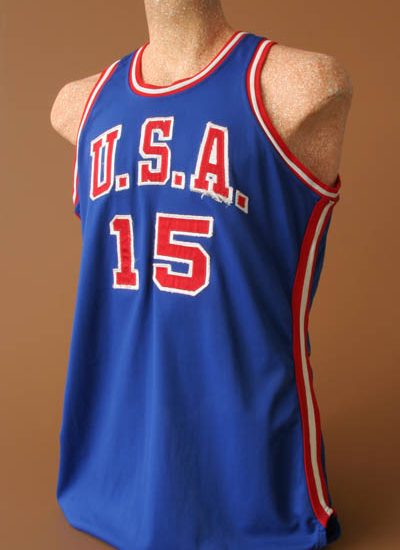 Mitch Kupchak played for the University of North Carolina and legendary coach Dean Smith. He was ACC Player of the Year in 1976 as he averaged 17.6 points and 11.3 rebounds. Prior to this, he was the starting center on the gold-medal winning USA team in the ’76 Olympics. He was a first-round draft choice of the Washington Bullets (13th overall) and was named to the All-Rookie team. During the 1977-78 season he posted a career high in scoring average (15.9) as he helped the Bullets win the NBA Championship. Acquired by the Lakers in ’81, Kupchak played in L.A. through the ’86-’87 season and helped the Lakers win an NBA title. Over his career he scored more than 5,000 points and averaged over ten points per game. After retiring, he continued working for the Lakers and is currently the general manager of the club.

Growing up on Long Island, Mitch Kupchak dreamed of one day playing baseball for his beloved New York Yankees. Little did he imagine that would become a great basketball player, winning NBA titles and Olympic gold. It’s even less likely that he ever thought he would also become a top basketball executive, heading basketball operations for an NBA champion.

Mitch was born on May 24, 1954 in Hicksville, New York. He developed a passion for baseball at an early age but, in his words, grew to be “tall, thin and awkward.” He soon lost his awkwardness, and his height drew him to basketball. He played his first year of organized ball in the 9th grade, and his high school coach, Stan Kellner, quickly realized Mitch’s potential. Stan pushed the youngster to improve his game, and before long Mitch was being recruited by some of the nation’s top college programs. In the end, Mitch was most impressed by North Carolina’s legendary Dean Smith. Coach Smith didn’t promise Kupchak that he would start, but just that he’d graduate and become a better basketball player.

Mitch was the first freshman to play basketball at Carolina after the freshman eligibility rule went into effect prior to the 1972-73 season. He was a top reserve that year, and then became an alternate starter as a sophomore. By his junior year he was a full-time starter and one of the country’s top players. During his final two seasons he was one of the top players in the Atlantic Coast Conference, averaging double figures in both points and rebounds. Kupchak was an All-ACC selection as both a junior and senior and was an All-American as a senior in 1976. He was also the ACC Player of the Year in 1976 as he led Carolina to a 25-4 record.

With career totals of 1611 points and 1006 rebounds, it surprised no one when his number 21 jersey was hung from the rafters by the Tar Heels.

Mitch had great admiration for Coach Smith. “Loyalty. Family. Discipline. Those are what come to mind when you hear the name Dean Smith,” Mitch once said. As Coach Smith promised, not only did Mitch become a better basketball player, but he earned his degree as well.

A fearless competitor, Kupchak played the game with great intensity despite persistent back pain. After his senior season he battled back from back surgery to start at center for the 1976 US Olympic team, and helped his squad to a gold medal. “It was a special moment having all those who had the greatest influence on me there watching,” he recalled.

In the 1976 NBA draft the Washington Bullets used a first round selection obtained from a deal with the Buffalo Braves, the 13th overall, to draft Kupchak. Despite joining a veteran front line that included Wes Unseld and Elvin Hayes, Mitch had an immediate impact. Taking on the “sixth man” role as the first player off the bench, Kupchak was a key spark for the team. Despite being about 6-9 and weighing 230 pounds, Mitch was a very active big man, diving for loose balls and running the floor like a guard. In his first season he scored 852 points (10.4 per game) and hauled in 494 rebounds, and his 57.2 percent shooting percentage was second in the NBA only to Kareem Abdul-Jabbar. He also earned NBA All-Rookie honors.

The 1977-78 season was a unique one for the Bullets. Kupchak had another great year, averaging 15.9 points. However, the team struggled for much of the year, especially when Mitch sat out 15 games with a thumb injury. When Washington made the playoffs with a 44-38 record, no one expected much.

However, the Bullets made it to the NBA Finals against Seattle, and won the championship in the seventh game on Seattle’s home court. Mitch dove for a lose ball and made a key three-point play late in the game to help seal the victory.

“I was young, 24, and totally consumed with the excitement of winning a championship. It’s something I enjoyed being a part of,” he recalled.

Washington returned to the finals the following year, but with Mitch injured, the Bullets lost to Seattle, 4-1. In 1981 Kupchak signed with the Lakers, finally getting his chance to be a full-time starter. However, he severely injured his left knee only 26 games into the season. Mitch underwent 16 months of intense daily therapy, though doctors told him that in all likelihood his career was over. To prepare for his future, he began pursuing his MBA at UCLA. “I had a guaranteed contract with the Lakers and I felt obligated to try and do something just in case I couldn’t play so that I could bring something to the table for the Lakers in case they wanted to keep me around.”

But Mitch surprised everyone by coming back. “I was half the player I used to be,” Mitch admitted. “I don’t sit around thinking about the great player I was or some great shot or dunk I made. My thoughts are more satisfying knowing I could come back from an injury and be a part of a team.” Although he was no longer as agile as he had once been, Mitch gave the “Showtime” Lakers the physical presence they needed to knock off the Boston Celtics for the 1985 NBA title. He became one of 22 players to win NBA championships with two different teams.

Mitch joined the Lakers front office in 1986, and soon received his MBA from UCLA. He soon began working with the man he described as his “mentor and close dear friend,” Jerry West. A former Laker legend as a player, West had guided the franchise five titles as head of basketball operations. Kupchak eventually rose up the ranks, becoming West’s right-hand man. After the Lakers won the 2000 NBA Championship, West decided to step down from the pressures of being executive vice president for Basketball Operations. The 46-year-old Kupchak took on the challenge of replacing a legend, one who had just led the Lakers franchise to a championship.

Kupchak’s low-key, soft-spoken style was a direct contrast to West’s high-profile persona. However, Mitch’s educational background, quiet demeanor and analytical mind made him extremely well-suited to run a team in today’s NBA. No longer can teams make trades simply based upon the abilities of the players involved.

Instead, they also have to evaluate the complexities how each player’s salary will impact the team’s salary cap. Mitch’s ability to deal with that aspect of his job has allowed him to acquire the players needed to complement the team’s two superstars, Shaquille O’Neal and Kobe Bryant. As a result, the Lakers went on to win two more NBA titles in 2001 and 2002.

Away from basketball, Mitch enjoys spending time with his wife, Claire, and two young children. “Family is great. My wife is very understanding and I love going home to my children. They don’t know if we won or lost. They don’t know who played well and who didn’t play well.”

Mitch Kupchak has come a long way, both literally and figuratively, from his early days on Long Island. He is one of those rare talents who not only was a superstar as a player, but moved over to the management side of his sport and achieved equal, if not greater success.