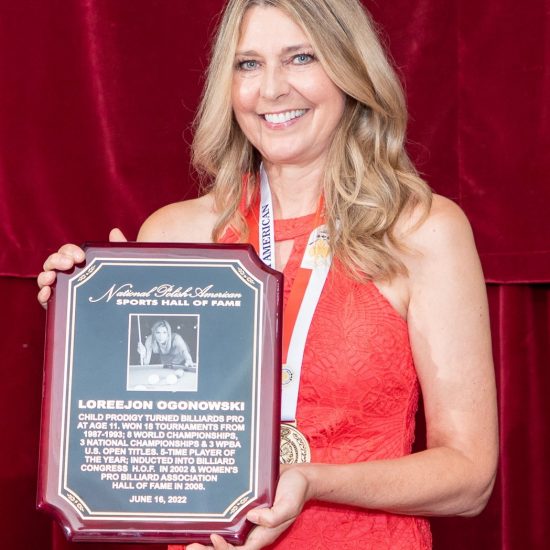 A child prodigy who began shooting pool at the age of 4, LoreeJon became a pro at the age of 11. She won the World 9-Ball Tournament at the age of 15 becoming the youngest player ever, male or female, to win a world title. Known as “Queen of the Hill”, she won 18 tournaments from 1987 to 1993. Her greatest victories are eight World Championships, three National Championships and three WPBA US Open titles. Ogonowski was named five times as Player of the Year. In 2002, she was inducted into the Billiard Congress Hall of Fame and in 2008, she was inducted into the Women’s Professional Billiard Association Hall of Fame. At the time of her retirement she held over 60 titles.

Billiards was a family affair for the Ogonowskis. Father John was a prominent player and his love for the game spilled over to his five children, the youngest of which was LoreeJon. In the early days growing up in Garwood, New Jersey, LoreeJon would accompany her parents to watch her older sister Nancy compete in local tournaments. It was at these tournaments that LoreeJon realized this was a game she liked. She really liked.

The family’s basement billiards table served as the training ground, with Dad as mentor and Mom as practice partner. Some of LoreeJon’s earliest memories involved “running a rack of balls at age 6 or 7 on a 5’ x 10’ table,” she said, an amazing achievement at any age, considering the normal basement or bar table is 3 ½’ x 7’.

At this point, John began to see the gift his daughter had been given. The father-turned-coach then installed wooden boxes on the floor around the family pool table so that young LoreeJon would be at the correct height so her mechanics would be flawless. This training built the technical foundation that would lead to one of the most decorated careers in women’s billiards.

LoreeJon has always been a feisty competitor with a never-give-up attitude. In her early 20’s, LoreeJon entered a series of five tournaments sponsored by Gordon’s Gin. After winning the first four tournaments, LoreeJon was in position to win the fifth tournament and complete the clean sweep. A missed shot late in the final tournament prevented this from happening. To this day, LoreeJon can describe the shot in great detail, as well as the emotional pain associated with missing the shot.

Ironically, it was during this stretch of tournaments that LoreeJon earned her nickname “Queen of the Hill.” After winning numerous close matches during that series, called hill-hill matches, the tournament director dubbed Ogonowski Queen of the Hill, a nickname that has stood the test of time.

The Importance of Family

After much success on the world billiards circuit, a brief sabbatical allowed LoreeJon to spend time with her three children Jonathan, Jessica, and Matthew. Whether attending Jonathan’s soccer games, watching Jessica’s equestrian events, or caddying for Matthew on the golf course, LoreeJon enjoyed every moment and cherished that time spent with her children.

LoreeJon also enjoyed working in the kitchen as a child. She fondly recalls spending time with her mom making Polish foods such as pierogi and Chrusciki (angel wings). A Polish market in Linden, New Jersey, which still stands today, provided the authentic ingredients for these meals. LoreeJon’s golabki is now a frequent request from her children as a Christmas meal, but Easter was the big holiday for the Ogonowski family. A full day of Polish food, from breakfast to dinner, was the norm during LoreeJon’s younger days. Pierogi, kielbasa, and Babka Bread, which blended her father’s Polish and her mother’s Ukranian heritage, were often served. Cwikla, or beets with horseradish, is still one of LoreeJon’s favorites.

LoreeJon was honored to learn that she had been nominated for the National Polish American Sports Hall of Fame and never thought she would be inducted. When she received the call notifying her of induction, she was shocked and called it “the icing on the cake.”

Her first call was to her mother Gloria, who is now 92 years old. After shedding a tear together, Gloria said, “I wish dad were here.” LoreeJon agreed and said, “he will be watching, I know this.” John Ogonowski, LoreeJon’s father and coach, passed away in 2016.

LoreeJon currently lives outside of Houston with her husband Terry and still plays in some professional tournaments. She likes to give back to the game by giving lessons to young players and working with junior players. LoreeJon teaches not only the technical part of the game instilled in her by her father, but stresses all aspects of the game.

The Queen of the Hill is currently the 15th ranked female billiards player in the world.