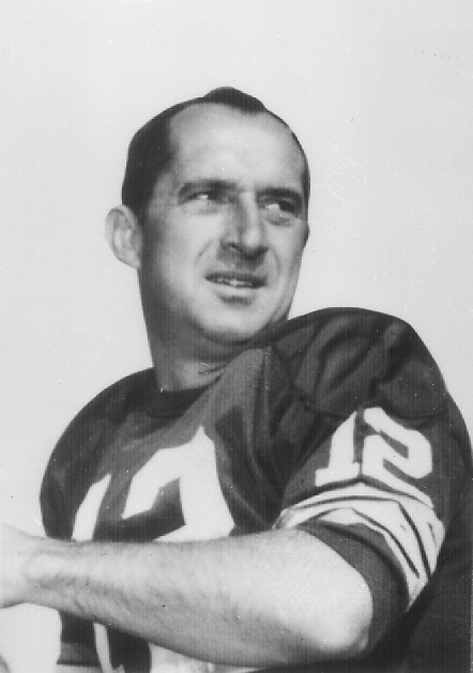 A native of Danville, Illinois, Edmund Raymond “Zeke” Bratkowski turned down, at his father’s insistence, an offer to try out for the Brooklyn Dodgers and headed for the University of Georgia, where he set numerous conference and NCAA records in passing and punting. In 1952, as a junior, he led the nation in passing; the next year, as a senior, he led the country in punting with a 42.6 average. “Zeke” played 14 years in the NFL for the Chicago Bears, Los Angeles Rams and, from 1963 to his retirement in 1971, the Green Bay Packers. Bartkowski and Bart Starr developed a close professional relationship. Bratkowski became known as “super sub” as the backup to Starr in the Packers’ 1967 and 1968 championship years. His career stats: 762 completions (51.2 percent) for 10,291 yards and 65 TDs, and a 38.7 average on 90 punts. Bratkowski has remained in the game for a number of years as a respected quarterback coach.

Few know more about playing QB than this “Super Sub”

There are few, if any, people who know more about playing quarterbackin the National Football League than Zeke Bratkowski. After anoutstanding collegiate playing career Bratkowski played quarterback inthe NFL for 14 years, and is best known as a “super sub” for the greatGreen Bay Packer teams of the 1960s. He subsequently began a successfulsecond career as a coach in the NFL.

The grandson of Polish immigrants is a native of Danville, Illinois.Born Edmund Raymond Bratkowski, he pickup up his nickname of “Zeke” atan early age when he wore a baseball jersey with the name of ChicagoWhite Sox slugger Zeke Bonura.

Zeke’s father was a fine athlete, and had the chance to try out for amajor league roster, but his parents insisted that he stay home andwork at the local zinc plant. Years later, when his son was offered atryout with the Brooklyn Dodgers, the elder Bratkowski told his son tostay in school and earn his college degree.

Zeke played football as well as baseball at the University of Georgia.In 1952, as a junior, he led the nation in passing. In 1953, as asenior, Bratkowski led the nation in punting with a 42.6 yard average.He also achieved a more dubious record, having thrown moreinterceptions in three years than any other Division I quarterback.

The 6-foot-4-inch, 204-lb. Bratkowski was drafted in the second roundof the NFL draft by Chicago. After his rookie year he went into the AirForce for two years, rejoining the Bears in 1957. Zeke then spent fourseasons with Chicago, mostly on the bench, before being traded to theLos Angeles Rams. He became a starter for the Rams, but the team hadlittle success. In 1962 the Rams had the worst record in the league,winning just one game.

Midway through the 1963 season Bratkowski was traded to the Green BayPackers, the defending NFL champions. Upon his arrival at the airportZeke was picked up by Bart Starr, the team’s starting quarterback, andthe pair went to Starr’s house to watch game films.

The two men quickly established a close professional and personalrelationship, even though they competed for the same position. Zeke wasnever able to unseat Starr as the Packers’ starting quarterback, butthat never stopped him from being prepared for every game, or fromhelping Starr prepare for the next opponent. It also didn’t prevent thetwo men from becoming close personal friends, probably the closestfriends on the team.

As teammate Jerry Kramer wrote in Distant Replay: “In 1963 and 1964Zeke rarely played and never complained.” Bratkowski said that he hadplayed in a two-quarterback system. “I know what it is, it’simpossible,” he said. “Coach (Vince) Lombardi has to go with onequarterback, with Bart, and I have to be ready.”

Zeke was ready when, in the second game of the 1965 season against theBaltimore Colts, Starr got injured in the third quarter. Bratkowskibrought the Packers back from behind with less than three minutesremaining, throwing a game-winning 37-yard touchdown pass to widereceiver Max McGee. The next week Starr was able to play, andBratkowski resumed his backup role.

At the end of the season Green Bay and Baltimore tied for the WesternDivision title, and met in a special playoff to determine the champion.Starr got hurt on the first play from scrimmage, and Zeke again tookover. The Colts led 10-7 late in the game, but Bratkowski led the teamto a game-tying field goal with time running out. In overtime, he ledthe Pack to another field goal to give Green Bay a 13-10 victory. Thefollowing week Starr was healthy, and Bratkowski was back on the benchas Green Bay beat Cleveland for its first of three consecutive NFLtitles.

In 1966 Zeke saw action in three key late-season games, and led theteam to three wins. The Pack captured the conference title when Zekeled Green Bay to comeback victory against, of all teams, the BaltimoreColts. The Packers again won the NFL title, and then defeated KansasCity in the first-ever Super Bowl.

The following season Zeke replaced Starr in four games, and the Packerswon three of them. Green Bay went on to win its third straight NFLtitle and second consecutive Super Bowl.

Zeke then returned to the Packers’ coaching staff, where he remaineduntil Starr retired in 1972. Bratkowski then joined the staff of theChicago Bears, his first pro team.

When Bart Starr was named coach of the Packers in 1975, he brought backZeke to coach the quarterbacks. Bratkowski left in 1982 when he had theopportunity to become offensive coordinator for, ironically, theBaltimore Colts. Frank Kush, who had coached Zeke’s son, Steve, atArizona State, was the Colt’s new head coach.

When Kush left the Colts in 1985, Zeke joined the staff of the New YorkJets. Serving under offensive coordinator Rich Kotite, the quiet,unassuming Bratkowski gained wide recognition for his work with KenO’Brien. Under Bratkowski’s tutelage, the young quarterback developedinto one of the league’s top passers. O’Brien was consistently at thetop of the league’s quarterback rankings, and had one of the lowestinterception percentages in the NFL.

Much of Bratkowski’s success as a coach was due to his years ofcollegiate and professional experience as a quarterback. He not onlypossessed extensive knowledge about the quarterback position andoffensive football, but he had the uncanny ability to convey thatknowledge to the players he coached.

Zeke spent 1990 with the Cleveland Browns, but when Kotite was namedhead coach of the Philadelphia Eagles in 1991 he brought Zeke aboard.His first season was a difficult one, as injuries caused the Eagles touse five different quarterbacks in the first half of the season.

In 1993 Zeke was promoted to be the Eagles’ offensive coordinator, andexperienced another rash of injuries. He lost three key starters toseason-ending injuries, including QB Randall Cunningham. In 1994, whenKotite was hired by the New York Jets, Bratkowski re-joined the Jets.

At the end of last season Bratkowski was released by the Eagles, alongwith Head Coach Rich Kotite and the rest of the staff. Shortlyafterwards Kotite was hired by the New York Jets, and Bratkowskire-joined the Jets.

Despite all the changes that have taken place in professional footballin the past four decades, Edmund “Zeke” Bratkowski has been able toadapt to those changes and earn a reputation as one of the game’s greatoffensive minds.