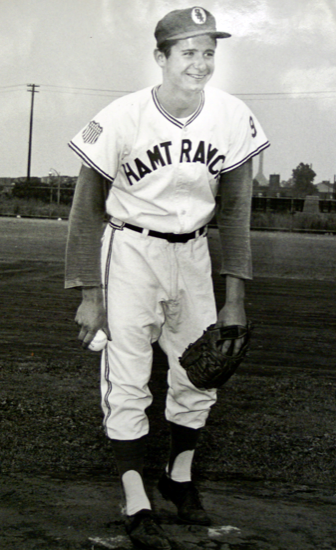 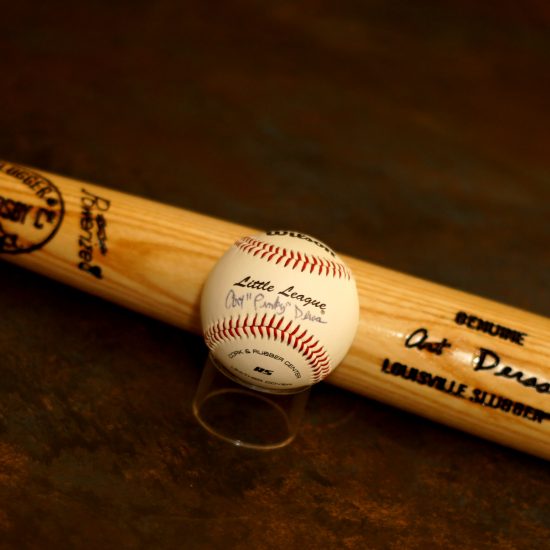 In the annals of Little League Baseball, Deras is arguably the greatest player of all-time. The Hamtramck, MI team reached the World Series finals in 1959 having won nine of ten tournament games by shutout. In the finals Deras tossed a one-hit, 5-0 shutout against Puerto Rico, hit a grand slam in a 7-1 victory over Hawaii, and threw a three-hit 12-0 victory over West Auburn, CA in the championship game. Deras’s single season pitching statistics were staggering: 18 starts, 18 complete game victories, 16 shutouts, 10 no-hitters, 298 strikeouts (only 26 outs in the field), and just 10 walks in 108 innings. At the plate he hit 13 home runs in 13 tournament games, giving him 33 for the season, along with 112 RBI and a .641 average. Two years later Deras led Hamtramck to the Pony League World Series Championship.

By BUCK JERZY
Past NPASHF Board Chairman

In the 72 year history of Little League Baseball more than 40 million boys ages 11 and l2 have played the sport, including Major League Hall of Famers Carl Yastrzemski, Tom Seaver and Nolan Ryan, among other future Major League players.

And then there was Art “Pinky” Deras — without a doubt, the greatest player to play in the Little League World series when he led the Hamtramck, Michigan team to the national championship in the l959 in Williamsport, Pennsylvania.

His l959 statistics include an 18-0 pitching record and 10 no-hitters. In 108 innings the big right-hander struck out 298 batters and only 26 outs came in the field. He walked only 10 batters. At the plate, Pinky compiled a .641 batting average with 33 home runs and 112 runs batted in. His pitches, thrown from distance of 46 feet, were clocked at 71 miles per hour – the equivalent of a l00 mph major league fastball. Pinky’s bat speed was timed at 105 mph, pretty close to Mickey Mantle’s 115 mph.

Hamtramck reached the Little League World Series by winning l0 games in a row, nine by shutouts. In the first game of the finals in Williamsport, Deras tossed a one-hitter to defeat San Juan, Puerto Rico 5-0. In the game he extended his personal string of scoreless innings to 69, while striking out 17 and maintaining his season average of 2.8 strikeouts per inning.

Hamtramck then defeated Oahu, Hawaii 7-l behind a Deras grand-slam homerun to reach the final game. Deras then won the championship game by blanking West Auburn (Calif.) 12-0, giving up only three hits and running his scoreless streak to 75 innings. He hit 13 home runs in13 tournament games.

Chrysler Corporation flew the l4-player hand-picked team and the coaches to Los Angeles for an appearance on the Lawrence Welk national television show.Welk’s popular musical show was sponsored by the Dodge Division of Chrysler – a natural since the cars were built at the Dodge Main Plant in Hamtramck. The boys also visited Disneyland and were introduced to the crowd at a Los Angeles Dodgers game

In l999 to celebrate the 40th anniversary of Hamtramck’s national championship, the team received the National Polish-American Sports Hall of Fame “Special Recognition Award.” Eight of the 11 living members of the team attended the annual Induction Banquet.

Only two years after winning the Little League World Series, Hamtramck – again led by pitcher-hitter Art “Pinky” Deras – captured the World Pony League baseball title for l3- and 14-year-olds. The Hamtramck youth baseball program became the first to win both championships. Since then only Marietta, Georgia has duplicated the fete. Besides Deras only four others played on both winning teams – Mark Modich, Billy Heald, Mike Milewski and Reggie Ferrebee.

One of Pinky’s teammates on the 1961 Pony League championship team was Tom Paciorek, who went on to star in the Major Leagues for 18 years (1970-1987) and was inducted into the NPASHF in 1992. He was the shortstop on the Pony League team and remembers Deras as one of the most “gifted, phenomenal and amazing” baseball players in his age bracket. “He was just so much better than the rest of us,” Paciorek recalls. “At l2 years old he was bigger, taller and stronger than us and the greatest player ever at that age.” Paciorek and Deras will be among their teammates to be honored in August at the 50th Anniversary celebration at the Pony League tournament in Washington, Pennsylvania.

Pinky won eight varsity letters at Hamtramck High School in baseball and football. He led the Cosmos to championships in both sports in the Twin Valley League. This was before Michigan began tournaments on the state level. In football Deras was a 6-foot-2, 210-pound strong-armed quarterback. He was offered a full-ride scholarship to play football for Coach Duffy Daugherty at Michigan State.

But baseball was his first love and his best game. Following graduation from Hamtramck High in l964, Pinky signed a big bonus contract with the St. Louis Cardinals. “I chose baseball because my parents needed the money. Just like now, the economy was bad and we couldn’t turn down the $80,000 bonus money,” he explained. Actually, the Cardinals outbid the Detroit Tigers for his services.

Deras played five seasons in the minors and rose to the AA Texas League with the Arkansas Travelers. The Cardinals converted him to a third baseman and then to the outfield. He never pitched in professional ball. Pinky played 518 games in the minors and hit 32 home runs. His best single-season batting average was .269 in 1968. Unfortunately, the pride of Hamtramck never played in the Major Leagues.

Following the 1968 season and with the possibility of being drafted into the Army,
Deras joined the Army Reserve, ending his baseball career. He moved on to the next chapter in his life and joined the City of Warren Police Department. He retired in 200l as a Detective after a 30-year career in law enforcement.

Pinky is still involved in Little League baseball as a father – Adam, his l2-year-old youngest son, plays in Sterling Heights. “It’s a different game today than what we played. There are no pitch counts and tournaments are single elimination – no second chances,” he said.

And in case you’re wondering, Arthur Stanley Deras got his nickname from his Polish grandmother shortly after he was born. “I never did learn how she picked the name ‘Pinky’ but it stuck,” our new Polish-American Hall of Famer explained.